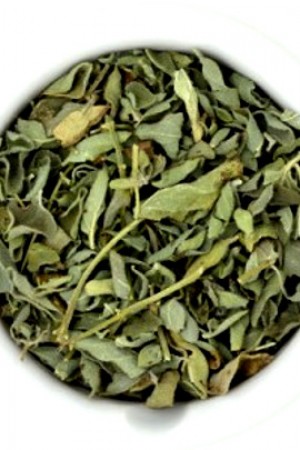 The herb, whose name means "delight of the mountains" in Greek, is native to the Mediterranean region however Australian grown oregano is the most beautifully pungent oregano, the best we have used.

Oregano is a wonderful perennial culinary as well as medicinal herb. It has long been recognized as one of the "functional food" for its nutritional, anti-oxidants and disease preventing properties.

It is the leaves that are used in cooking, and the dried herb is often more flavorful than the fresh so 1 tsp. dried Oregano Leaves = 2 tsp. chopped fresh oregano.

Oregano adds flavor to Greek salad and is usually added to the lemon-olive oil sauce that accompanies many fish or meat barbecues and some casseroles.

Oregano is a robust and spreading plant. It thrives as a perennial in most climates, grows to around 60 cm tall, has roundish leaves and is covered by a down of fine hairs. Oregano has a piercing scent and and its flavor is strong, in keeping with its bold appearance. When dried, oregano has a pleasing depth of taste with a distinct, sharp, peppery element to it.

There are a number of different types of Origanum that grow wild in Greece and are variously referred to as rigani. The flavors and, to a lesser degree, the appearance of the different types of oregano can vary greatly depending upon climatic and soil conditions. Australian grown oregano is the best, most beautifully pungent oregano we have ever seen.

Oregano has many anti-bacterial, anti-fungal, and anti-viral properties that enhance detoxification and offer immune support. Oil of Oregano is excellent in reducing yeast related issues, and is believed to reduce inflammation. Oregano is also excellent for reducing bloating and indigestion.

Hippocrates, the great Greek philosopher and scholar, used oregano for medicinal purposes. He used it as both an anesthetic and for digestive problems. Oregano’s key chemical components are Acetate, Borneol, Bisabolene , Carvacrol, Caryophyllene, Cymene, Geranyl, Linalool, Linalyl Acetate, Pinene, Terpinene and Thymol. All of these chemicals are present in the leaves and in the oils, so they have both topical and internal benefits.

Because of its anti-parasitical affect, its oil has been used in head lice treatments. Herbalists recommend it for the treatment of E-coli.

Oregano also has anti-inflammatory benefits. Some people rub the oil on inflamed joints and muscles. Topically, it can also be used as an antiseptic and anti-bacterial spread to relieve acne, cold sores, and minor cuts and scrapes.

It has been used in the treatment of allergies and even to regulate menstrual periods. Some cultures use it as a powerful pain killer. A few drops of the oil in juice consumed for 3-5 days may help clear up a sinus infection.

It has been thought to be an effective treatment for bacteria and parasite infestation in the colon and intestines.

Oregano is a proven super "functional food". This herb is one of the foundation bases of healthy Mediterranean diet in addition to olive oil, fish and lots of greens, herbs and vegetables. It has an excellent nutritional profile; just 100 g of oregano herb provides the following percent of Recommended Daily Allowance:

Not everyone should take oregano. Women who are pregnant should avoid digesting or absorbing oregano as it can weaken the lining of the embryonic sack.

If you are allergic to mint, sage, basil or thyme, you might also be allergic to oregano. Though used in the aid of digestive problems, it can cause the opposite effect in some people.

Oregano oil may reduce the body’s ability to absorb iron, which is another reason women and children in particular should not consume large amounts of oregano. Seek medical advice about an iron supplement if oregano is a staple in your culture’s cuisine.