Use a decanter but never a wine aerator - unless you paid under $20 for that red!

After years in a bottle a wine may need a little air to come alive and show its aromatics. Carefully pouring wine into a glass decanter allows it to interact with air helping odors to dissipate and flavor components to emerge, softening mouthfeel and the grip of tannin.

When the cork is removed two processes begin, evaporation and oxidation.

Evaporation rapidly releases alcohol and aromatic notes. Alcohol in wine evaporates at an initial rate of one-half percent per hour which may reduce the perception of "heat" in a wine but soon will remove the fuller "mouthfeel" or "roundness" that alcohol provides. More importantly many undesirable sulfide aromas leave rapidly like the "struck-match" or "rotten-egg" aromas followed by some mercaptans with their notes of boiled vegetables or garlic.

With sulfide compounds blowing off aromatic compounds that provide fruity aromas can be perceived however some aroma compounds that contain sulfur, for example the black fruit aroma of Cabernet Sauvignon, are broken down relatively quickly by oxygen so decanting time is important to allow unwanted aromas to leave while preventing loss of beneficial fruit aromas.

As a general rule wine should be tasted as soon as it is opened to determine how long it might be aerated, so always take a small glass for tasting. This will also leave a larger surface area of the wine exposed to the air. 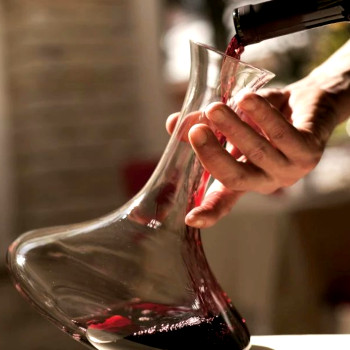 Using a clear glass decanter gives the wine a much more elegant appearance at the table. To decant, remove the entire capsule from around the neck of the bottle so you can see the wine pouring through the neck and check for sediment.

Hold the Decanter in one hand (left, if you are right-handed) and the bottle in the other, and with a smooth and steady action, pour the wine into the decanter taking care that your pouring is slow, continuous and steady.

When the wine is decanted and placed on the table it is customary to place the bottle next to the decanter so that your guests can refer to the label.

The decanter is thought to mimic the effects of swirling the wine glass to stimulate the movement of molecules in the wine triggering the release of more aroma compounds.

In addition it is thought to benefit the wine by smoothing some of the harsher aspects of the wine like tannins or potential wine faults like mercaptans. 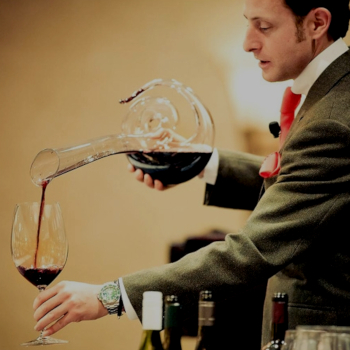 The decanter is intended to improve the quality, taste, and clarity of the wine and we can agree that decanting alters the perception of sulfides and other chemical compounds in the wine through oxidation, which can give some drinkers the sense of softer tannins in the wine.

There is also a psychological element to decanting wine. If your guests perceive you are treating a wine with respect by decanting they will develop elevated expectations of this wine and be more receptive to it.

What Wines to Decant

As a general rule, wines that have been aged in oak need to be decanted. Strong flavored wines like Bordeaux Blends, Cabernet Sauvignon, Malbec and Rhône wines will endure decanting well and our suggested period of decanting for wines less than fifteen years old should be approximately half an hour.

Over exposure to oxygen may actually dissipate more aroma compounds than it stimulates so different wines require different decanting processes, before serving for several reasons, namely:

For older wines begin tasting immediately after decanting and continue to taste as the flavors could dissipate quickly, depending the varietal and vintage. Careful decanting of new Burgundies is also effective for rapid oxygenation but older, expensive Burgundies could collapse with too much air.

Typically red wines which have aged in bottle perhaps ten years or longer will develop sediment. Sediment is composed of microscopic solids which develop over time by the breakdown of polyphenols in the wine and then these solids settle at the lowest part of the bottle. 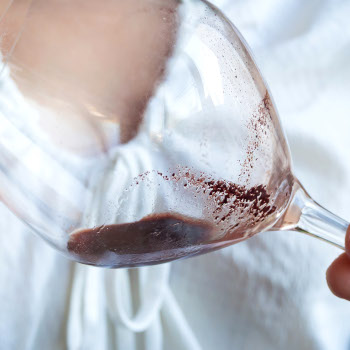 Sediment in the wine is visually distracting and can be quite unpleasant in the mouth.

Whatever decanter you use be sure it is spotless and free from any outside aromas. The normal long-neck-flat-base shape of a decanter can make it difficult to clean. Never wash your decanter with detergent, use a mixture of crushed ice and coarse salt to remove any residual wine, then simply rinse with hot water. If you want to be sure its clean give it, and your stemware, a cycle in your dishwasher but without any detergent, then rinse with mineral water to remove any residual chlorine odor it may have picked up.

Choosing a decanter is the same process as choosing wine stemware. A clear, crystal decanter allows the wine color to be seen on the table. For years we have recommended the Reidel brand however glass companies are tending to favor decorative display over practical form making modern decanters somewhat ineffective as delicate aerators, difficult to use and to clean.

We use and recommend a plain crystal decanter which aerates the wine exceptionally well, displays the true color of the wine, pours easily and cleans with minimal effort.

EMAIL US YOUR QUESTIONS