Williamson Wines is one of the few modern sparkling houses to utilize Méthode Champenoise, the process of crafting elegant sparkling wines in the traditional manner over years.

Widely regarded as the premium method for producing sparkling wine, the Williamson winemaking team takes the finest elements of the Méthode Champenoise tradition and creatively melds them with unique flavors from the vineyard, a process that takes care, judgement and more than five years to complete.

A well-made sparkling red must show characteristics of the varietal from which they're made as well as reflect the terroir where they're grown, their sense of place. Using traditional Méthode Champenoise to produce these wines ensures the smaller bubble structure making them more food-friendly than a still wine made from the same grapes.

If you want to make a great wine, use great fruit so we use the same fruit that we use for our reserve red wines. The texture and richness in the sparkling wine is more important than the acidity and letting the grapes stay on the vine as long as we would for a reserve wine enables riper flavors.

Our first sparkling wine venture was the 2008 Malbec which produced the instantly successful Bubbles Sparkling Malbec.

No simple red blush sparkling wine, Bubbles started life as a full-bodied, 14.5% alcohol Malbec wine spending the first two years in French Oak barrels. Starting with this full-flavored Cuvée wine we commenced the next three years of the Méthode Champenoise process, described below.

With a five-year-long production process, this is a celebration sparkling red, a suitable replacement for champagne with its concentrated plum and blackberry flavors, with toffee and leather notes. This aged, Sparkling Malbec is a dry, bubby deep red wine.

Holding true to the vision to make a "grower-style" sparkling white to compete with the wines of Champagne, our inaugural 2013 Brut Blanc Fizz was produced using a traditional French Cuvée blend of 60% Chardonnay and 40% Pinot Noir.

In 2019 Sam and Bill had the unique opportunity to join several Apollo astronauts for dinner at Kennedy Space Center in Florida. At dinner we toasted the 50th anniversary of the moon landing with the original astronauts, some who had left their footprints on the moon. Truly an occasion worthy of the finest French Champagne but we were using Williamson Wines Fizz which all agreed was "out of this world!"

With the absolute success of the Bubbles Sparkling Malbec we had to salute our Australian heritage by making Bliss Sparkling Shiraz.

Sparkling Shiraz is a keystone of Australia’s wine heritage. Bliss Sparkling Shiraz ensures that this very Australian wine, nurtured by generations of winemakers, can now be enjoyed by our American friends.

As with Bubbles its sister wine, Bliss is first made as a full-bodied Shiraz wine spending the first two years in French Oak barrels. Again we created a full-flavored, low alcohol Cuvée wine and began the next three years of the Méthode Champenoise process

Méthode Champenoise ~ Our Quest for Perfection

The first fermentation begins in the same way as any wine, converting the natural sugar in the grapes into alcohol while the resultant carbon dioxide is allowed to escape. This produces the base wine known as the Cuvée.

After primary fermentation, blending assemblage, barrel aging and then bottling, the wine then undergoes tirage a second fermentation in the bottle.

Prior to bottling the Cuvée is adjusted to below 12% alcohol and 0.050g/100ml volatile acidity (VA), the measure of the wine's volatile acids.

With the higher alcohol red wines a sample is treated using Spinning Cone Technology, a gentle process that reduces the alcohol in wine with no aroma or flavor loss. The reduced alcohol sample is then blended back into the master Cuvée which is bottled and on to tirage for a second fermentation in the bottle.

After the addition of yeast, nutrients for the yeast, and sugar, collectively called the liqueur de tirage, the bottle is then stopped with a plastic pod and a crown bottle cap and stored in the cellar horizontally while a second fermentation completes within the bottle, resulting in a naturally sparkling wine.

During the secondary fermentation, carbon dioxide is trapped within the wine in solution, forming the bubbles. The amount of added sugar determines the pressure within the bottle. To reach the standard value of 6 bars (600 kPa) of pressure inside the bottle, it is necessary to have 18 grams of sugar; the amount of Saccharomyces cerevisiae yeast is 0.3 gram per bottle. The liqueur de tirag is then a mixture of sugar, yeast and still Cuvée wine.

The wine is stored on the lees sur lie under its own carbon dioxide pressure for at least three years before disgorging takes place, to get a more mature character.

Yeast precipitate lees must then be removed. This begins with riddling remuage where the bottles are turned with the neck downwards and lightly shaken to move the lees to the neck of the bottle. This is done in small steps where the bottle orientation gradually changes.

The process to remove lees is called disgorging where the inverted bottle necks are chilled so that the precipitation freezes to a small block of ice, the bottles are turned upright and the temporary crown cap closure is opened and the precipitate collected in the plastic pod is pushed out by the pressure in the bottle.

Immediately after disgorging before final corking, the liquid level is topped up with liqueur d'expédition, a practice known as dosage. The liqueur d'expédition is a mixture of the base wine and sucrose, plus 0.03 grams of sulfur dioxide as a preservative.

The amount of sugar in the liqueur d'expédition determines the sweetness of the Champagne, the sugar previously in the wine having been consumed by the second fermentation. Generally, sugar is added to balance the high acidity of the Champagne, rather than to produce a sweet taste.

Brut Champagne will only have a little sugar added, while nature or zéro dosage will have no added sugar. A cork is then inserted, with a capsule and wire cage and hood muselet securing it in place.

Some Champagne houses maisons de Champagne have secret recipes for dosage, adding ingredients such as filtered older reserve wine and cane sugar. Following this tradition at Williamson Wines we have our own special recette de la maison, specific to each of our sparkling wines.

Champagne is a sparkling wine produced from grapes grown in the Champagne region of France. Sparkling wines produced elsewhere, such as the United States. These are generally labeled as sparkling wine.French Champagne's sugar content varies resulting in various sweetest levels, namely:

Historically, Champagne contained much more dosage than it does today. Tastes have evolved now preferring drier wines as the richness of a modern foods requires less sugar. At Williamson Wines we focus on brut as the dryness level of our sparkling wines.

Bubbles - Malbec with small, hollow, light globules in it? We called it Bubbles.

Fizz - Because that's how you welcome friends - "Pop open some Fizz"

ROMANTIC NAME “™” TRADEMARK NOTICE - The Romantic name used in conjunction with this wine has been used originally and exclusively by WILLIAMSON WINES, LLC as a trademark to distinguish their so marked wine products from those of other companies. WILLIAMSON WINES, LLC is the sole owner of this mark and any unauthorized use is an infringement of copyrights, trademarks and proprietary rights.

Without a point of reference most wine drinkers are unaware of the quality and pleasure sparkling wines can deliver. 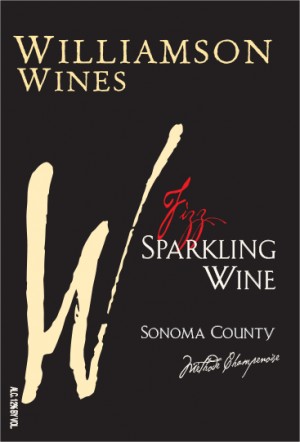 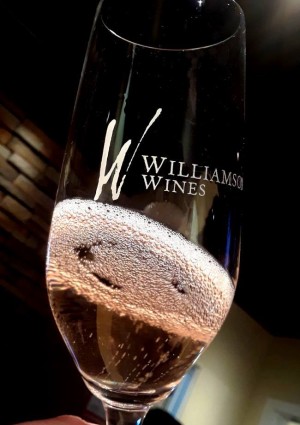 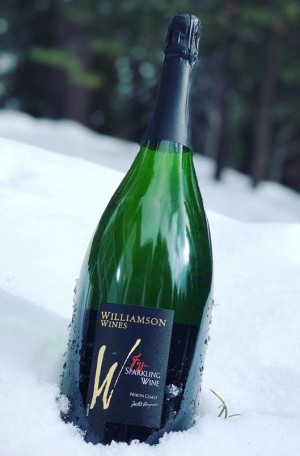 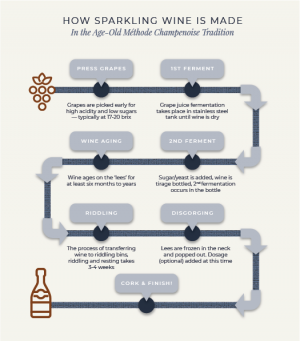 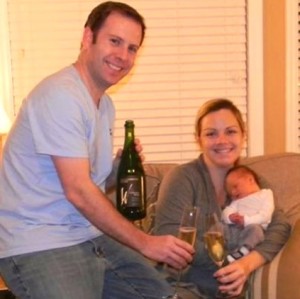 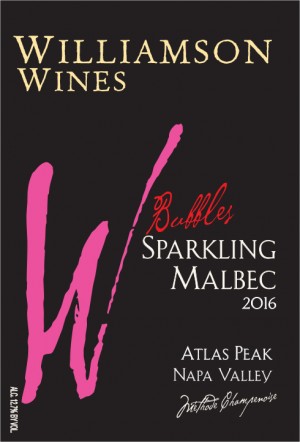 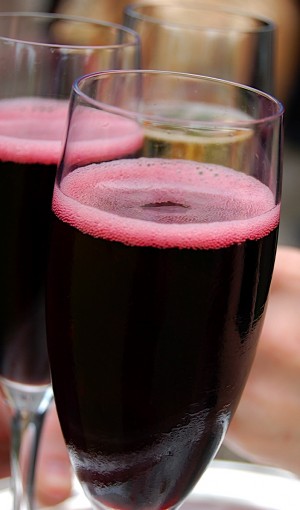 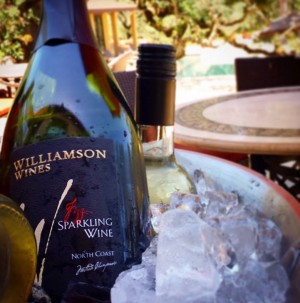 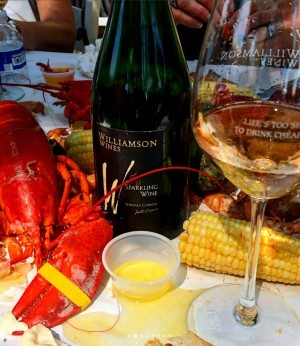