Aging, sometimes called ripening, is the most important stage of cheese production. By allowing cheeses to rest in controlled conditions, they develop the appearance, texture, flavor and aroma qualities that make them unique.

During aging, the bloom blossoms on Camembert, the holes burst into Swiss, and the veins shoot through Gorgonzola. The mildest cheeses, like ricotta, cream and cottage, are consumed fresh and not ripened at all while Parmigiano Reggiano is aged three years, giving it a very complex nutty somewhat fruity taste and a hard, gritty texture.

Normally cheeses are aged under controlled conditions from a few days to several years. As a cheese ages, microbes and enzymes transform texture and intensify flavor. This transformation is largely a result of the breakdown of casein proteins and milkfat into a complex mix of amino acids, amines, and fatty acids.

Club cheese selections are cut to size in our commercial kitchens and wrapped in our special cheese paper. The paper is lined with a breathable layer which prevents the cheese from being suffocated or drying out and allows the cheese to continue maturing while on route to you.

Once individually wrapped, the cheese club selections are packed in a thermal container with reusable food-friendly “cool” packs and sealed in an insulated shipping box. All cheese shipments are sent via overnight air to arrive fresh and cool at your home or office.

Because cheese is a biologically active living food, wash your hands with soap and water before handling and avoid cross-contamination of cheese flavors by cleaning knives and cutting boards with boiling water between cuttings.

It has been considered best practice to re-wrap cheese that has been opened with new, clean wrapping and designate a location in your refrigerator that is free from strongly aromatic foods because the cheese may absorb the aromas. Most refrigerators have a “dairy” or “cheese” drawer.

Fresh, rindless cheeses such as Mascarpone, Fresh Mozzarella, Queso Blanco, Ricotta and Feta, should be stored at 35°F to 39°F. Place the cheese in a plastic container covering it tightly in storage to avoid flavor absorption from other foods. Feta keeps best when stored in a salt brine bath in a tightly sealed plastic container. If you find mold on a fresh, rindless cheese, discard the entire product.

Semi-soft, rindless cheeses such as Cheddar, Muenster, Havarti, Colby, Baby Swiss, Swiss, Farmers, Fontina, Monterey Jack and Queso Quesadilla should be stored at 40°F to 45°F, wrapped in parchment or waxed paper first and then again in plastic wrap.

Bloomy rind include Camembert and Brie. Bloomy Rind cheeses are surface ripened. This means that the surrounding fluffy white mold encourages the proper ripening of the interior paste of the cheese. During the cheese making process, the outside of the cheese is coated with Penicillium candidum, which is a specific mold culture that forms into a “bloomy” edible crust. As the flavor-producing candidum mold begins to break down, a creaminess spreads throughout the interior of the cheese, giving it an optimal flavor and smooth texture.

Chevre is a generic term for cheese made from the milk of goats, chevre meaning goat in French. Some chevre have rinds while some do not.

Store all these cheeses at 40°F to 50°F and at an elevated humidity of 65%. After the cheese is cut, wrap it in waxed or parchment paper and place it in a plastic container pierced with several holes to allow air circulation. If the cheese appears to be drying out, place a clean, slightly damp paper towel in the bottom of the container to elevate the humidity.

If the cheese begins to smell ammoniated, remove it from the container and let it sit uncovered in the refrigerator or on a clean counter. Once the odor is no longer present, rewrap the cheese in clean paper and refrigerate. If the odor persists after 2 to 3 hours, discard the cheese.

Blue-veined cheeses include Blue Cheese and firm or Italian-style Gorgonzola. Store at 40°F to 45°F at elevated humidity levels, wrapped in aluminum foil, preferably the original foil of the cheese. Finding mold on a blue-veined cheese is usually a good thing, however, if the mold is across the surface and is darker than usual then discard the entire piece.

Cheese Storage Vault - Getting Real All that wrapping and storage information is good but:- these are some of the many reasons why we recommend having one or two of the Cheese Vault.

The Cheese Vault is a simple, inexpensive and reusable way to store your artisan cheese.

Cheese experts agree that the worst possible way to store your cheese is by wrapping it in plastic wrap. Cheese needs to “breathe” and eliminate excess moisture to maintain its flavor and delay molding just like in a cheese cave. Until now, the only recommended solution for proper cheese storage was to use disposable wrappers or bags. 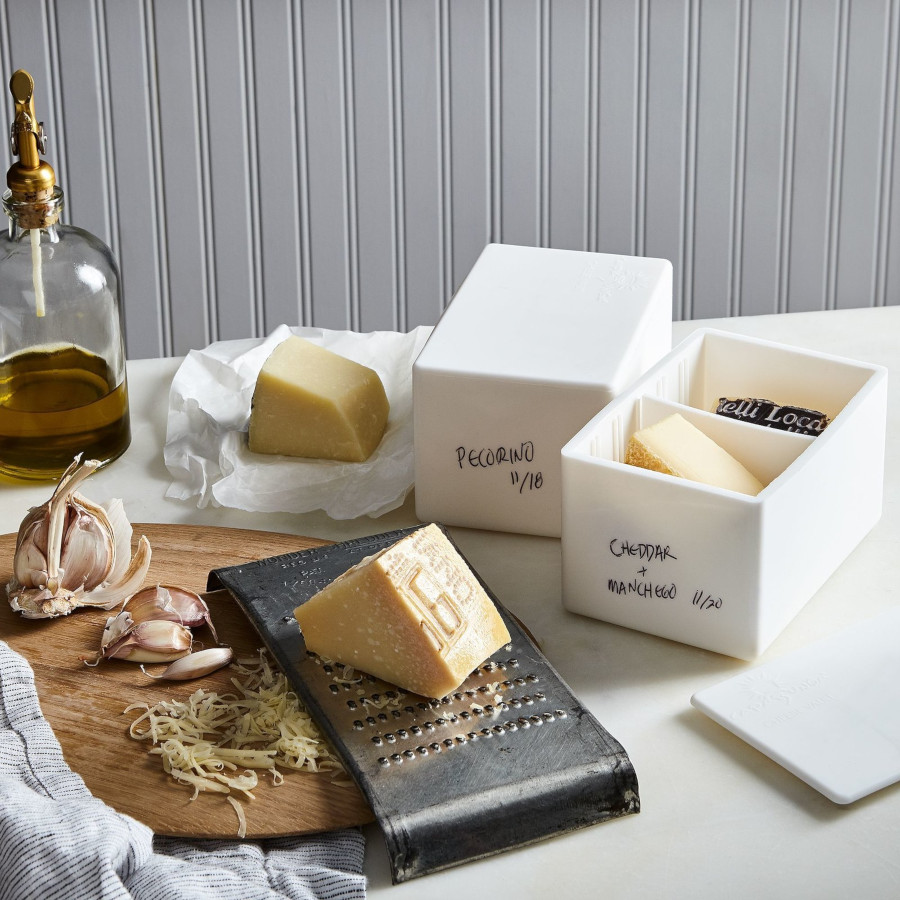 Over a decade has passed since Members asked us to pair our wines with cheese and to create a cheese club and we began to look at cheeses on a global scale. In our travels we found hundreds of creameries producing unique and delicious cheeses. We delight in finding these creameries, pairing their cheese with our wines and sharing them with our Members to enjoy.

Our cheese database now has over two hundred exceptional cheeses many of which we have paired with our wines. Every quarter we select six cheeses for our cheese club members. Four ounces of each cheese is paired with a wine in our quarterly wine club shipment.