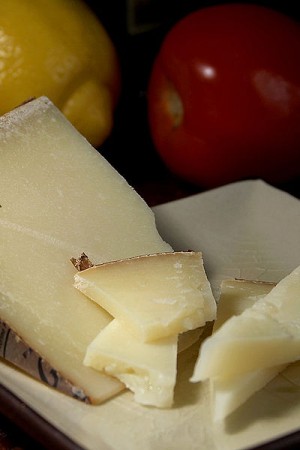 Fiore Sardo DOP also known as Pecorino Sardo is a raw, hard cheese made from whole sheep’s milk on the Italian island of Sardinia. The cheese which is said to have originated during Bronze Age was awarded DOP status in 1996.

As per DOP standards, the cheese is made with milk sourced from a single flock of local Sardinian breed. Nowadays, there are industrial versions where a blend of cow's and sheep's milk or even pasteurized milk is used to prepare Fiore Sardo.

The cheese, after a total aging of six months, has a natural, golden-yellow to dark brown rind and a sour, damp smell. Upon slicing, the pate reveals a compact, dense, straw yellow or white color. It is wonderfully rich in flavor, with caramel sweetness, salty tang and a hint of fruit. The spicy flavor of the cheese intensifies depending on the length of maturation but regardless of age this cheese pairs perfectly with Embrace Grenache..