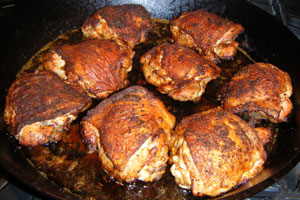 Chicken thighs seasoned with crushed red pepper and star anise and braised in a sauce with tomatoes and red wine.

Preheat the oven to 350°. In a small skillet, toast the coriander, star anise, cracked peppercorns and crushed red pepper over moderate heat, shaking the pan, until fragrant, about 2 minutes. Transfer to a spice grinder and let cool; pulse until coarsely ground. Add the salt. Rub the spices all over the chicken.

In a large skillet, heat the oil. Add the chicken and cook over high heat, turning once, until deep golden, 10 minutes. Arrange the chicken in a roasting pan, skin side up. Pour off most of the oil from the skillet and add the onion and leek. Cook over moderate heat, stirring, until softened, 5 minutes. Add the tomatoes, thyme and oregano and cook until the tomatoes just begin to break down, 3 minutes. Add the red wine and cook until reduced to 1/4 cup, scraping up any bits stuck to the pan, 5 minutes. Stir in 1 cup of water and pour the mixture into the roasting pan.

Cover the pan with foil and braise the chicken in the oven for about 1 hour, until cooked through. Transfer the chicken to a plate. Strain the sauce into a saucepan. Boil until the sauce is reduced to 1 cup, 5 minutes. Stir in the vinegar and honey; keep warm.

Preheat the broiler. Return the chicken to the roasting pan, skin side up, and broil 8 inches from the heat for 2 minutes, until the skin is crisp. Sprinkle with the parsley and chives. Serve the chicken with the sauce.