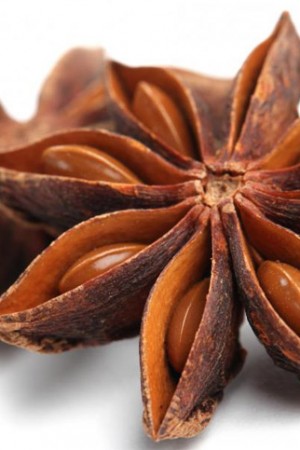 Chinese star anise is one of the most beautiful and fragrant spices in the world. The dried, star-shaped fruit of this Oriental tree are called Star Anise because of their distinctive star shape.

Not to be confused with Anise Seed, Star Anise has a similar anise taste however it is quite pungent, clovey and licorice-like. Star Anise is an essential component of Chinese Five Spice powder and is used in many Oriental recipes, especially those made with duck. Star Anise also adds flavor to stewed compotes of fruit when placed in whole during cooking.  Most often, star anise is added to a recipe whole, to be steeped in liquids and then removed before the conclusion of the recipe.

One of the fundamental components of Chinese five-spice powder, star anise is popular in Chinese "red cooking", where meat (often beef or pork) is turned a deep red-brown color by being braised in a dark soy sauce flavored broth. It's equally delicious in roasted duck or risotto, peach crumble or pea soup, iced tea or ice cream, cookies or chai.

Whole Star Anise is often used in craftwork as it is so beautiful, on a plate as a garnish or floated in a pot of tea. Since the flavor of star anise is very strong, most star anise used in cooking is broken or powdered, as a whole star overpowers most dishes.

Powdered Star Anise is great for baking. Use 1/3 as much as recipes using anise seed call for. Powdered star anise is essential for Chinese 5 spice and many Asian recipes for duck and pork.

Star anise is an Asian cooking ingredient from Illicium verum, an aromatic evergreen tree found in Southern China, Vietnam, and parts of Japan. The tree is extensively cultivated for its useful culinary spice, widely used in Chinese cuisine, as well as in foods from Southeast Asian nations including Thailand and Vietnam. It consists of the dried seedpods of the tree, and has a flavor much like anise, a spice widely used in European cuisine. Star anise, however, is slightly more pungent, bitter, and intense.

Health Benefits: Star Anise contains a plant-based compound that, in conjunction with antioxidants, is said to be a dynamic anti-viral combination. Extracts of star anise have been shown to exhibit strong antifungal properties, and is thought to be beneficial in eliminating toxic yeasts, such as Candida Albicans, which is linked to acne, migraines, low energy, and weight gain, to name but a few. Star Anise is an excellent source of antioxidants, which help to neutralize free radicals can cause premature aging and cell damage. Star Anise is also used for respiratory problems, and to ease digestive discomfort. It has been used to increase male and female libido.