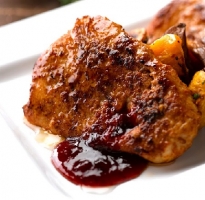 When you want the height of flavor but don't have time to deal with a whole bird, roast a turkey breast with bacon and onion marmalade for a moist, delicious turkey taste that's full of flavor and works with our Elate Grange Cuvee.

Heat a heavy bottom pan on high heat. Add the diced bacon and cook until crispy, then remove from the pan with a slotted spoon and drain on paper towels. Pour out the majority of the bacon fat.

Then heat the remainder of the bacon fat on medium heat. Add the onions, garlic, and Herbie's Cloves'; cook until they are coated with the bacon fat and they are beginning to sweat and the cloves are fragrant. Then deglaze the pan with bourbon.

Turn the heat down to medium low. Add the brown sugar and butter, once all the ingredients are incorporated cover and simmer for at least 30min. until the texture resembles a jam.

Meanwhile, Take the turkey breasts and pat them dry with a paper towel. Season both sides with salt and pepper.

In a Large sauté pan heat 1 tablespoon of vegetable oil on high heat. Once the oil begins to shimmer add the turkey breasts skin side down and cook without flipping until the skin is golden brown.

Turn them over so they are skin side up and put the pan in the oven. Cook for about 10 minutes or until the internal temperature has reached 165 degrees.

Once the Turkey breast are done serve with the warm bacon and onion marmalade accompanied by a glass of Elate Grange Cuvee.

Not only does this marmalade go great with most proteins such as: pork, chicken, or steak but it is a great side for your Thanksgiving meal.