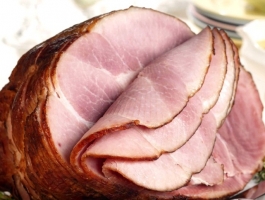 A baked ham is one of the easiest things to prepare for a holiday celebration. It’s economical and the ham is already cooked, all you have to do is apply a nice glaze and bake to serving temperature.

Baked ham, considered a staple of special meals at holidays such as Christmas or Easter, is a simple but tasty dish so just follow the instructions below to prepare a perfect baked ham with a toffee and Pomegranate sauce that's going to pair perfectly with our Cabernet Sauvignon and is sure to leave guests wanting more!

Let the ham sit out until it has reached room temperature. Pre-heat the oven to 375 degrees. In a small bowl combine the brown sugar, salt, and both the Biryani spice mix and Mixed Spice blend. This will be your rub for the outside of your Ham.

Take your brown sugar rub blend and pack all of it onto the outside of the ham to form a crust. Its okay if it is a thin coating as long as it is coated. With your roasting pan fill the bottom ½” with water, just so it almost reaches the bottom of the rack. Place the ham on the rack and cover the entire pan loosely with foil. Put the rack in your oven on the middle or bottom rack and cook for 2 ½ hours or until the core temperature of the ham reached 140 degrees.

Meanwhile, for your sauce take a medium sauce pot and combine all ingredients except for the butter and heavy cream. Reduce the sauce mixture for 15 minutes or until it is thick enough to coat the back of a spoon. Then whisk in the butter, heavy cream, and chocolate syrup. The finished sauce should be syrupy but not too thick with a light purple color to it.