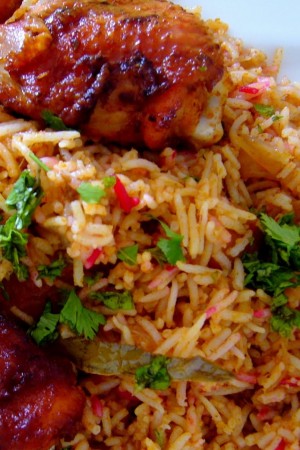 A tasty salt-free spice blend that will enable you to make a delicious family meal in a single dish.

Biryani is a rice-based dish made with spices, rice, (usually basmati,) and chicken, lamb, fish, eggs, or vegetables. The name is derived from the Persian word beryā which means "fried" or "roasted".

Biryani denotes a dish where the rice (plain or fried) is cooked separately from the thick sauce (a greatly reduced curry of meat or vegetables).

The curry and the rice are then brought together and layered, resulting in a dish of the contrasting flavors of flavored rice, cooked separate with spices, and intensely flavoured sauce and meat or vegetables.

This separation is partly of necessity: the proportion of meat and/or vegetables to the rice is high enough to make biryani a one-dish meal but the cooking time of each of the main ingredients is significantly different from each other.

In a properly made biryani, the final dish is dry or minimally moist, with the individual rice grains separate, as opposed to a risotto, where the rice is of a creamy consistency.

Consequently biryani recipes call for the rice to be cooked for three-quarters of the usual time, followed by layering with the meat/vegetable base, and then a final slow-steaming until fully done. This approach allows all the flavors to blend and integrate.

We have been experimenting with the biryani spices and wines, applying persian spice mixes such as biryani to traditional Western (American) foods, hence our recipe for Holiday Toffee Baked Ham with Red Wine Pomegranate Sauce which uses our Herbie's Biryani spice mix to add flavor to a traditional baked ham.