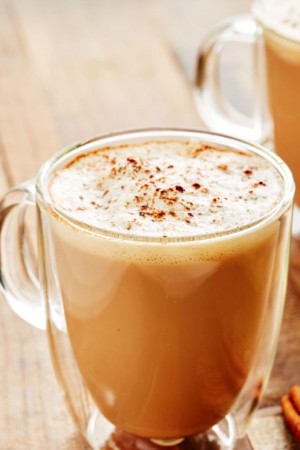 Developed by our Aussie mate Herbie this Turmeric Chai Tea makes a sweet, exotic and healthy beverage to relax with at home whenever you have a latte craving.

Looking for ways to enjoy the health benefits of turmeric? Our turmeric chai spice blend is great in drinks, desserts and can also be used in savory dishes like our coconut cream Panna Cotta which is also dairy free.

Turmeric tea is considered safe for most people to drink. It can relieve pain and inflammation without the side effects that even over-the-counter medications like NSAIDs can cause, such as internal bleeding, ulcers, and reduced white blood cell count.

The slightly yellow color of this latte comes from the curcumin found in turmeric. Curcumin has significant anti-inflammatory properties that rival those found in ibuprofen but unlike over-the-counter drugs, curcumin has no toxic effects.

Curcumin’s powerful antioxidant advantages have been shown to protect healthy cells, particularly those found in the colon, from cancer-causing agents.

As if that weren’t enough, turmeric also helps to lower cholesterol and prevent heart disease.

The key however is the addition of black pepper, vital to releasing the health benefits of the turmeric.

Fresh, natural, pure herbs and spices blended and packed in Australia from imported and local ingredients then flown directly to our California Epicurean Kitchen.
$11  ·  Add To Cart