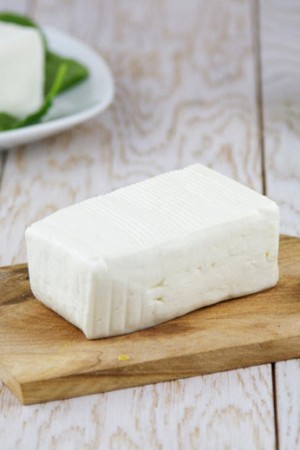 Squacquerone, pronounced "skwa-kwe-ROH-nay" with the stress on the ROH is a fresh farmers cheese from Lombardi.

The main ingredient is full fat cow's milk which is curdled. The difference between this soft cheese and "Raviggiolo" is in the ageing and salting processes. The shape is indefinite (which is where it gets its name from: "acqua" meaning water and describing its soft, liquid consistency). It is soft and tender, without a rind and tastes of slightly acidulous milk. It is produced all year round but is eaten fresh within three days at the most.

It is best spread on hot "Piadina" (Pita Bread) and enjoyed with either of these white wines:

To get "Squacquerone", pasteurized milk is heated to 37-38 degrees and liquid rennet is added; it curdles in 20-25 minutes. After the curd is broken, the cheese is left to stand to get rid of the excess liquid. Then it is placed in special moulds in a room heated to 25-30 degrees with 90-95% humidity. Initially, the cheeses are turned over continuously, and then less and less; the process comes to an end when the cheese has reached the right consistency; it is left in brine for about two hours. It matures in 4-5 days in the fridge, where the cheese is wrapped in paper; the finished product has a yield of 11-12% of the original. There is no ageing process and the cheese is produced all year round.

Squacquerone from Romagna (Squaquaron) has ancient origins and is closely linked to life in the countryside where it used to be produced and eaten during the winter, because it could be kept fresher for longer.

From November 30th, 1799 until March 14th, 1800, 34 cardinals of the Roman Catholic Church were imprisoned on the Isola di San Giorgio Maggiore in Venice. Almost a year earlier, Rome had been invaded by Napoleon Bonaparte who attempted to depose Pope Pius VI and eventually took him prisoner. The Pope was taken to France where he died on August 29th, 1799. With Rome being occupied by the French, the cardinals decided to meet in Venice to elect his successor.

All this seems to have proven too much for Cardinal Carlo Bellisomi, the Bishop of Cesena in Romagna, who was at one point a favorite in the election. In a letter back home, he complained that he hadn't yet received the Squacquerone cheese he'd asked for. Evidently the good cardinal was missing the taste of home. We know thanks to a letter from his secretary that the cheese arrived on February 24th, 1800 - two days before the beginning of Lent when cheese would have been off the menu for six weeks. One can imagine the cardinal gorging himself before it was too late. These letters are the first written proof for the existence of Squacquerone.

Squacquerone is one of the typical cheeses of the Lombardi area and is mostly eaten with "Piadina Romagnola" (a kind of unleavened bread). Like "Cassatella", it is a variation on the earlier "Ravviggiolo".

Sourced from creameries all over the world many of our cheeses are from small family-owned, alpine farms and only produced in limited quantities or at one-time each year. We take most of their production which goes straight out to our club members.

Our cheeses are sold in an 8 ounce cut. When ordering more please use “quantity” in multiples of 8 ounces i.e., for one pound order a quantity of 2.

Because our cheese club members take precedence we may have limited inventory of some cheese products.

If you order a cheese that is unavailable our customer service team will contact you with delivery details or a substitute cheese product.

Your cheese selections are individually wrapped in sustainable, recyclable, low environmental impact food wrapping which will extend the life of the cheese in your refrigerator.

The cheese is then carefully packed in an insulated container with “cool” ice packs and sealed in its shipping box to be sent via overnight air arriving fresh and cool at your home or office.

We search the world for fresh, natural cheeses made from milk produced by family-owned, free grazing animals and crafted by artisan, quality-focused cheese makers. Each year we choose only the best cheeses to pair for our wine and cheese club members to enjoy.