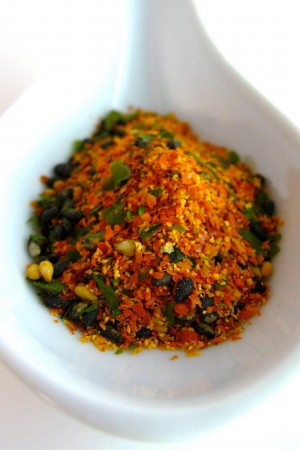 Togarashi, the Japanese word for “chili,” is a group of condiments always including chili that bring out the clean, simple flavors of Japanese food. Shichimi togarashi is also called seven spice (shichi is “seven” in Japanese), because seven ingredients are generally used.

Based on a traditional Japanese seasoning with a hot chili bite, this is one of the most popular seasonings in Japan.

Sprinkle on fish, seafood and both white and red meats before cooking, or use as a tasty seasoning at the table instead of salt and pepper.

Fresh, natural, pure herbs and spices blended and packed in Australia from imported and local ingredients then flown directly to our California Epicurean Kitchen.
$9  ·  Add To Cart