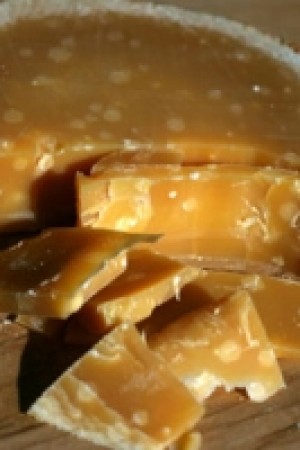 An extra-aged, four year-old Gouda with a rich butterscotch color and similar notes of flavor. Noord Hollander brings an intensity of flavor through the slow drying over the years which leaves a tangy, crunchy, salt-nut bite to this deliciously intense cheese.

Noordhollander (North Holland) is one of the most fertile Dutch sheep, originally bred in 1974 by crossing hardy sheep from the island of Texel with Finnish sheep to produce strong, well developed animals which give a large yield of high quality milk.

This incredibly delicious cheese is made from the highest quality milk from the rich, green pastures of North Holland. The land here, raised up from low-lying seas, is especially rich in minerals from ocean clay sediments. The milk from this area is noticeably sweeter and richer than any other Dutch milk. This four year aged gourmet cheese has deep flavor with carmel overtones and tiny slat crystals. It makes a great table cheese and is a fantastic dessert with wine.

Featured in the December, 2010 Cheese Club paired with Williamson Elate GRANGE CUVÉE and this cheese is so good that we paired it again in December 2015 but this time with our Chantilly Chardonnay.