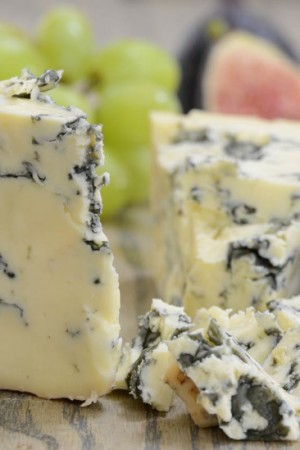 Bleu d'Auvergne is a French blue cheese, named for its place of origin in the Auvergne region of south-central France. It is made from cow's milk, and is one of the cheeses granted the Appellation d'origine contrôlée from the French government

This blue, made from pasteurized cow's milk, is mellow and meaty, well balanced salt and spice makes d'Auvergne a perfect companion for cooking or for simply enjoying with a nice wine.

Super-intense and crumbly. Bleu d'Auvergne also has a creamy texture and subtle, rustic flavors, buttery yet tangy, with notes of spice, pepper and salt.

d'Auvergne ismade using century-old techniques and an uncompromising attention to quality. The result is a blue that's ideal for both snacking and cooking.

As with the other great blues, you can contrast the heady flavor of Bleu d'Auvergne with the sweetness of fresh fruit, and/or a dessert wine.

It's great crumbled on a tossed salad or added directly to your freshly-made vinaigrette; it will mellow the dressing's acidity. Try a small piece on a slice of apple for a beautiful, healthy snack! For a special treat, serve it with toasted nuts and with a full-bodied red wine.

Bleu d'Auvergne is a French blue cheese, named for its place of origin in the Auvergne region of south-central France. The Auvergne lies in the heart of the Massif Central, a mountain range with a chain of long extinct volcanoes, or "Puy."

The Allier is rich farm country with gentle hills and huge forests. The landscape of the Puy-de-Dome and Cantal highlands changes into sweeping glacier valleys, lakes, waterfalls, and a wide plateau. There you will find unspoiled medieval towns and mountain villages. Charming farmhouses rest on the plateaus in the wilds of the Labradors.

As you might expect, the people here are warm and friendly. From spring until late autumn, there are country fêtes which are held to celebrate the harvest and the movement of the herds to their mountain pastures.

The terrain near Auvergne is craggy and desolate, and actually better suited to raising sheep than cows. Even so, the region manages to produce enough cow's milk to eke out its small annual production of Bleu d'Auvergne. The cheese boasts an abundance of blue veins and a smooth yet intense flavor that blue lovers covet!

This cheese, granted an AOC certification in 1975, tastes of clover, wildflowers, and wild onions. These are the main plants the cows feast on, and what a cow eats really does flavor the milk they produce, as well as the cheese made from that milk.

Why are some cheeses designated as AOC? The Appellation d'Origine Controlee, or AOC, applies to wines, eaux-de-vie, dairy, and farmhouse products. It guarantees that a product of quality has been produced within a specified region following established methods of production and is regulated by laws.

First created in 1854 by a Roquefort maker who experimented by sprinkling mold (Penicilium Roqueforti) growing on a piece of his rye bread into newly formed curd. The resulting cheese proved popular and, after the recipe was perfected by Antoine Rousset, the cheese became known as Bleu d'Auvergne. Milk for production would have originally come from the breed of Ferrandaire cow.

Our Cheese Club selection is produced four times each year and includes eight different 4-ounce sample cuts at a single low price to make a great tasting tray or a complete cheese course at dinner.
Inquire about our Cheese Club . . .

Read All About Cheese ~ Milk's Leap Toward Immortality . . .