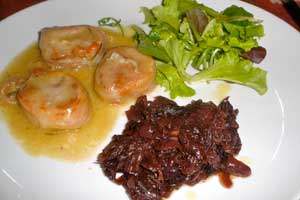 The pork tenderloin is a cut of pork and refers to the psoas major muscle along the central spine portion, ventral to the lumbar vertebrae. This is the most tender part of the animal, because these muscles are used for posture, rather than locomotion.

Melt the butter in a large saucepan. Add the onions and sugar, cover and cook over low heat, stirring occasionally, until the onions are caramelized, about 30 minutes. Cooking the onions in butter and sugar gives a beautiful sheen to this rich, tangy marmalade. Add 3/4 cup of the wine and the raspberry vinegar and boil until the liquid is syrupy, about 8 minutes. Season with salt.

Meanwhile, season the pork medallions with salt and pepper and sprinkle with the rosemary.

Top each medallion with a slice of pancetta and, using kitchen string, tie up like a package.

Heat the olive oil with the garlic in a large skillet. Add the pork medallions, pancetta side down, and cook over moderately high heat until browned on the bottom, about 3 minutes.

Reduce the heat to moderate, turn the medallions and cook until just cooked through and browned on the second side, about 10 minutes longer. Transfer the medallions to a warmed platter and cover loosely with foil. Discard the garlic.

Add the remaining 1/3 cup of red wine and the balsamic vinegar to the skillet and boil over moderate heat, scraping up the browned bits on the bottom, until reduced by half, about 2 minutes. Add the stock and simmer until reduced to 2/3 cup, about 5 minutes. Stir in any accumulated juices from the pork and season with salt and pepper.

Remove the string, set the pork medallions on plates and spoon the onion marmalade alongside. Pour the sauce over the medallions and serve with Williamson Cabernet Sauvignon.