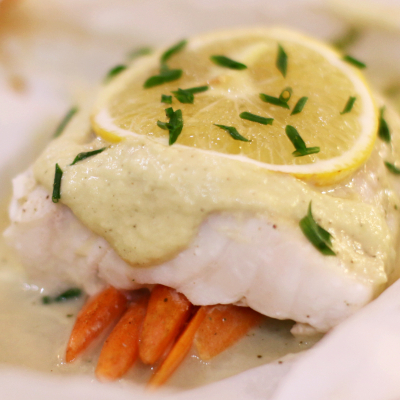 Preheat oven to 400 degrees. Wash leeks thoroughly to get rid of any grit. Melt butter in a large skillet over medium heat, and when the foam subsides add the sliced leeks and let wilt, stirring occasionally until leeks are soft but haven't taken on any color. Add one tablespoon of Native Lemon Pepper Seasoning, a pinch of salt, and the white wine and simmer 5 minutes until the alcohol has burned off.

Remove from heat and add to blender with the heavy cream and blend until creamy. Season with salt to taste.

Meanwhile cut four large hearts out of full size parchment paper. On one side of the heart place a few carrot slices, and the Halibut filet on top. Season with salt and the remaining Native Lemon Pepper Seasoning. Spoon two tablespoons of the leek sauce over the top and place a lemon slice on top. Fold the other half of the heart over the halibut and tightly crimp together starting at the top of the heart and working around to form a packet. Right before sealing at the end pour a couple of tablespoons of wine into the packet and seal tightly.

To serve, place each packet on a plate and use scissors to open snip the top open and pour the remaining leek sauce tableside.