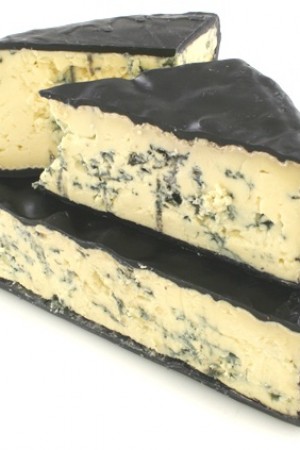 The rindless cheese is matured in its wax coating, which cuts off the oxygen supply, promoting its sweet and fruity flavor.  The wax also assists in retaining the blue's moisture, creating a smooth and creamy texture.

The cheese is named after the infamous Roaring Forties gale-force winds which frequently bring westerly winds of more than 60 miles per hour to King Island located at 40 degrees latitude in Bass Straight, between the southern tip of Australia and the northern tip of Tasmania.

Blue vein cheese is a unique category of mould ripened cheese, as it ripens from the interior as opposed to the exterior (like soft white cheese). It mostly has a strong tangy flavour, pungent aroma and a smooth and creamy texture.

Blue vein cheese is distinguished by the blue-green veins of mold located throughout the body of the cheese. The veins are created during production when the cheese is 'spiked' or 'pierced' to allow oxygen in, which promotes the growth of the blue mold producing a cheese which is rich and buttery yet tangy with a pungent aroma, a smooth soft texture and a sometimes salty finish.