Famous throughout the world, this traditional Tuscan pecorino is fresh and pleasing in taste, with aging, the mild flavor develops into a rich, full-bodied savory cheese. Aged for minimum of 120 days

Serve this elegant aged cheese as an antipasti with honey, jam and fruit. It is also wonderful shaved over salads and grated over pasta and rice dishes.

Pecorino Toscano PDO is entirely produced in the whole Region of Tuscany but also in some municipalities of the Region of Latium and Umbria. Breeding of sheep in the area started with the Etruscan people, but this cheese had origin in Roman Times. In the XV century, Pecorino Toscano PDO was called “March cheese” due to its production in the month of March.

Pecorino Toscano PDO has to be stored in the least cold department of the fridge, wrapped in a cotton cloth slightly moistened. 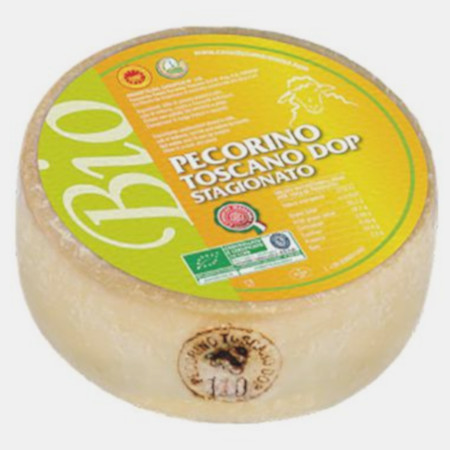