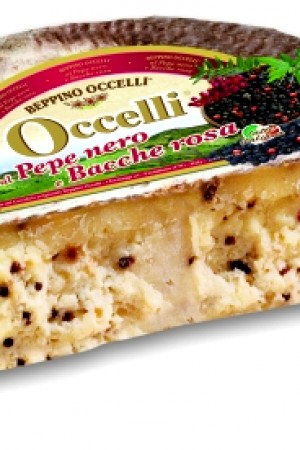 Produced from sheep’s and cow’s milk, Occelli al Pepe Nero e Bache Rosa ages for at least four months in the cellars of Valcasotto where it matures on boards of wood of this valley. In the body, grains of black and pink pepper enrich the range of its flavors and aromas

Beppino Occelli began his dairy activity in 1976, first with his butter, obtained exclusively from first-rate cream and immediately judged among the finest in the world, and later with the cheeses. His is a story of taste, rich insights and satisfaction, but also of sacrifices, due to the impoverished way of life of the rural mountain areas. Beppino Occelli’s story can probably be explained by his profound love for the land of his birth - the Langhe and the Alps - to which his creations and personal interpretations of traditional products are tied.