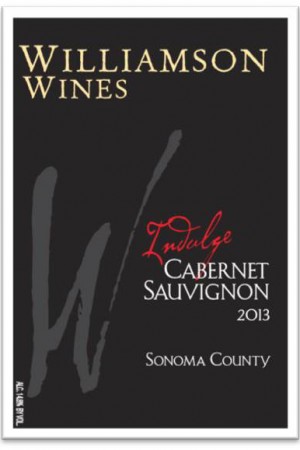 This wine was Bill's indulgence in making yet another incredible Cabernet from our Dry Creek Valley estate fruit.

Indulge is largely Dry Creek Valley Estate Vineyard fruit with a touch of mountain Cabernet Sauvignon fruit. Each vineyard lot is picked at optimal ripeness and made into a standalone wine then Bill creates a blend to indulge his pallet for fine wine with character and flavor.
more . . .

A deep rich dark plum color which carries the same rich plum with a hint of tobacco to the nose. An exciting mouthful of peppered plum with hints of caramel, tobacco, black licorice and toffee ending in a well rounded while still robust tannin finish that will undoubtedly soften with a little time in the bottle. Will drink well now or may be laid down for several years.

Only 432 cases produced. No allergens were used in the making of this wine.

The 2013 vintage exceeded our expectations on both quality and quantity. Rare as it was to have another fruitful year right after the record breaking 2012 crush, early, even and excellent are three words used to describe the 2013 year growing season and the wine grapes that have come from it. A warm, dry spring brought early bud break, helped with canopy vigor and berry size and created ideal conditions for flowering and fruit set under sunny skies. With the exception of one heat spike in late June temperatures were consistently in the zone for optimal vine activity, resulting in notably healthy vines as fruit went through veraison and started optimal ripening to produce epic fruit.