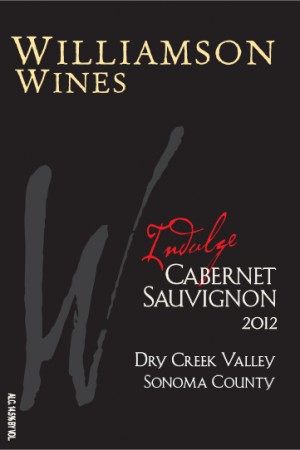 This is the 6L Imperial version of the Gold Medal winning 2009 Indulge Cabernet Sauvignon.
more . . .

The bottle is a *“Trezzano”* Bordeaux style magnum designed by Bruni Glass of Milan, Italy. On one side of the bottle the names have been etched into the glass and highlighted in cherry red and white enamel. The WILLIAMSON WINES name has been etched and highlighted with actual gold. To crown this special package, the neck was dipped in cherry red wax.

All of this work was performed in the hands of expect craftsmen as is fitting of such a handcrafted wine. Only 48 of these unique magnums were produced. As a final step, they are personally numbered and signed by winemaker Bill Williamson. The bottles were sparged with nitrogen and then filled by hand.

The corks were fitted individually by hand, a process that insures each bottle is filled and sealed correctly. However, this step often results in a little wine being spilled on the cork, so if you remove the wax cap and see wine stain on the top of the cork, don’t worry, the cork is not leaking. No allergens were used in the making of this wine.