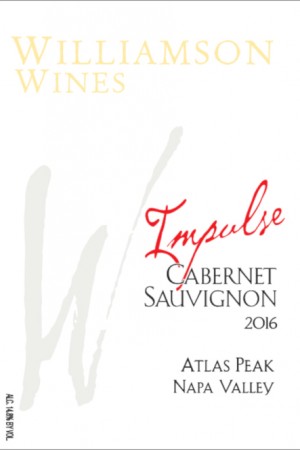 Impulse varies according to the character of each vintage, however, Cabernet Sauvignon always predominates to give Impulse its rich tannin, its wealth of aroma and flavor, while Merlot, an inseparable companion, brings suppleness, roundness and exceptional length.

How difficult it is to follow a vintage as amazing as 2014! However, Impulse 2016 fits well into the continuity of the greatest vintages of the beginning of this century!

The nose is particularly delicate, complex and deep with just a hint of violets.

On the palate, the wine has incredible volume, smoothness and length showing notes of ripe dark berries, truffle, tobacco and cassis (blackcurrant), a combination of complex flavors that have become the signature of our Cabernet inspired wines. Naturally, it is our high altitude Napa blocks of Cabernet Sauvignon that give this wine all its elegance. They make up 87% of the blend.

The Merlot and the Cabernet Franc, with 8% and 2% respectively, bring a great complexity to the wine both with aroma, and with the smoothness of their tannic structure.

Finally, the Petit Verdot and Malbec despite their small quantities, with only 2% and 1% of the blend, bring considerable density and volume.

In concert with this vintage's dry and cooler summer conditions, this wine has kept all its acid potential, the beginnings of perfect evolution and preservation.

Impulse 2016 is an exceptional wine, the result of the combination of amazing weather conditions, the knowledge of our terroir and a great harvest selection effort with 92% being picked on October 10, 2016.

Only 153 cases produced. Our vineyards are farmed to the code of sustainable agriculture using traditional techniques, based on strict control of yields, manual harvests and numerous quality specific tasks that are carried out by hand throughout the year.

After a ten day cold-soak the grapes from each plot are fermented in separate five-ton, temperature-controlled, stainless steel fermentation tanks in order to preserve the identity of the terroir.

The ageing phase commences in the cellar and takes 20 months during which the cellar master racks the wines three times in order to clarify them naturally. No fining agents are used so the wines remain vegan.

Following bottling the wine is permitted two to four years rest in bottle prior to release to the wine club. While immediately drinkable it will continue to age gracefully for at least ten years.

The 2016 growing season got off to an early bud break and moderate weather prevailed throughout summer. The lack of heat waves kept sugar levels and phenolic maturity in sync allowing ripening to progress slowly and predictably. Late August was unusually cool and cloudy, nicely extending hang time without excessive sugar accumulation winding up with exceptional color in the reds.