1655 Gruyere cheese is a hard cheese with a yellow color, made from cow's milk and named after the town where it originated, Gruyère in Switzerland.

This cheese when young can be described as a creamy cheese with predominantly sweet, nutty flavor but it acquires a complex earthy, slightly salty flavor with an assertive taste as it ages.

When Gruyere cheese has been aged from 5 to 12 months, it starts having small cracks and holes, which makes the texture somewhat grainy.

The origin of Gruyere cheese dates back to 1655, when this cheese was created in Switzerland’s Gruyere (often called Gruyeres) region located in Fribourg canton. Before 2001, when this cheese was awarded the Appellation d'Origine Contrôlée (AOC) status of being a Swiss cheese, it led to controversies as French cheeses with similar characteristics wanted to share the label of Gruyère.

Fromagerie Le Cret is located near Gruyere’s namesake village in the Canton of Fribourg, Switzerland. Cheesemaker Jean-Marie Dunand goes to great lengths to maintain high standards -- using only his most exceptional milk, making about half as much cheese as his quota would allow, and constantly refining his process. The result is a dairy that is a frequent recipient of the Gruyere Association's Medaille d’Or, an award presented to dairies with the highest evaluations every month for five years.

Aged by a local affineur that has been in business since 1915, Gruyere 1655 is marked by a fresh cream blast, a bright fruity flavor and a deep, structured nuttiness. The paste is light mocha in color and studded with pinpoint crystals.

Culinary Uses of the Gruyere Cheese

The cheese also contains vitamin B12, vitamin A, panthothenic acid, vitamin B6, vitamin K, thiamin and folate. This cheese is a rich source of minerals like calcium and phosphorus, with some amounts of zinc, manganese and selenium present in it. Also, Gruyere cheese contains 95 mg sodium that makes up 4 percent of the recommended daily sodium amount. 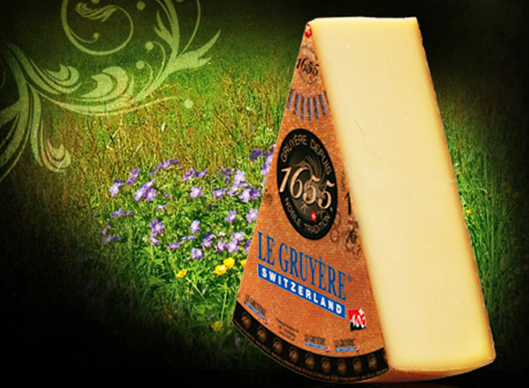