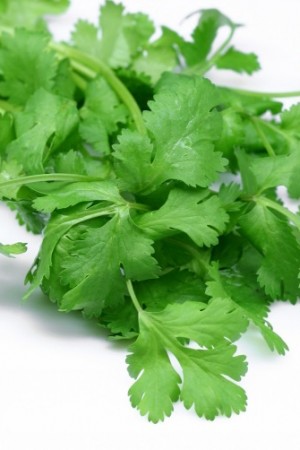 Widely used in Mexican, Caribbean and Asian cooking, Cilantro leaves look a bit like flat Italian parsley. It is actually the leaves (and stems) of the Coriander plant.

In the Middle East the Cilantro leaves are used in pickles, curries, and chutneys.

In Mexico and the Southwestern U.S. it is used in everything from salsas and salads to burritos or meat dishes.

The coriander seeds are used in sweets, breads, cakes and to flavor liqueurs.

Pronounced [sih-LAHN-troh] this member of the carrot family is also referred to as Chinese Parsley and Coriander.

Widely used in Mexican, Caribbean and Asian cooking, Cilantro leaves look a bit like flat Italian parsley and in fact are related.

Fresh coriander leaves (cilantro) are a rich source of Vitamin C, K, and amino acids (protein). They also contain small amounts of alkalizing minerals, such as calcium, and potassium.

Cilantro, Chinese Parsley, Japanese Parsley. Seed: The seed should always be referred to as Coriander Seed.*