Cinnamon is one of the oldest spices, produced from the bark of the cinnamon tree that grows in India, Sri Lanka, Indonesia, Brazil, Vietnam and Egypt.

The cinnamon from Sri Lanka is considered to be the original cinnamon that has the most health benefits and the sweetest taste. Our ground cinnamon quills from Ceylon (Sri Lanka) are the best grade of cinnamon to use.

Herbie personally sources our Ceylon cinnamon, using only the thin inner bark which has a finer, less dense, and more crumbly texture, and is considered to be more aromatic and more subtle in flavor than cassia.

Cinnamon quills are 3 inch lengths of tightly rolled, concentric layers of the very thin underneath layer of cinnamon bark. This has been carefully peeled off cut branches and then rolled by cinnamon peelers into yard-long quills like a giant cigar. These long quills are then cut into the familiar short ‘sticks’.

Cinnamon quills have an aromatic fragrance and can be put into stewed compotes of fruit, used to flavor gluwein, and curries.  A half-inch stick, broken up and put into a coffee plunger with the grounds gives the coffee a delicately spiced flavor.

The characteristic flavor and aroma of cinnamon comes from a compound in the essential oil of the bark called cinnamonaldehyde.

In traditional Chinese medicine, cinnamon is used for colds, nausea, diarrhea, and painful menstrual periods. It's also believed to improve energy, vitality, and circulation. It's a common ingredient in chai tea, and it is believed to improve the digestion of fruit, milk and other dairy products.

Recent studies have found that cinnamon may have a beneficial effect on blood sugar. One of the first human studies was published in 2003 in a medical journal called Diabetes Care. Sixty people with type 2 diabetes took approximately half a teaspoon of cinnamon daily. After 40 days, the cinnamon reduced blood glucose by 18 to 29%, triglycerides by 23 to 30%, LDL cholesterol by 7 to 27%, and total cholesterol by 12 to 26%.

Since that study several other studies suggest that cinnamon is an effective antiviral with the ability to stop medication-resistant yeast infections. It also has an anti-clotting effect on the blood, is an effective antioxidant and has shown to inhibit the development of Alzheimer's in mice.

In a study published by researchers at the U.S. Department of Agriculture in Maryland, cinnamon reduced the proliferation of leukemia and lymphoma cancer cells.

In a study at Copenhagen University, patients given half a teaspoon of cinnamon powder combined with one tablespoon of honey every morning before breakfast had significant relief in arthritis pain after one week and could walk without pain within one month.

When added to food, it inhibits bacterial growth and food spoilage, making it a natural food preservative. 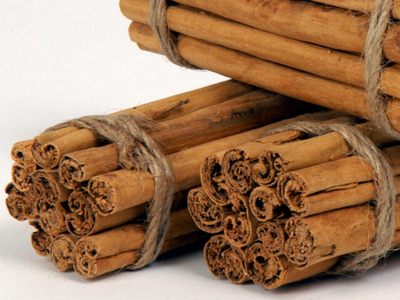