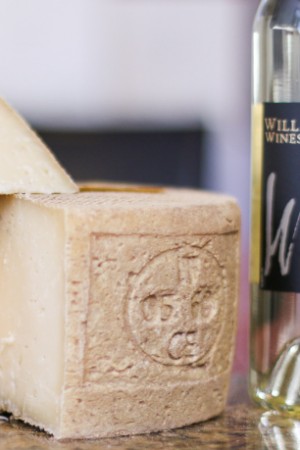 Bastardo del Grappa is a traditional Italian cheese made from cow's milk from two milkings – one from the evening, and the other from the following morning. It is produced in the area of Monte Grappa in Veneto, hence the name.

Bastardo Del Grappa is made in the mountains of the Grappa region of Northeastern Italy where the cows graze on grassy pastures year round. It is crafted from combined evening and next morning milking. It is a creamy, full flavored cheese in the family of Normandy Brie. It is a light yellow color with an uneven rind that is especially flavorful. Its history runs parallel to the history of Morlacco cheese.

The name derives from the fact that Bastardo is produced when the milk, for chronological or environmental reasons, cannot be made into Morlacco.

It is produced in the numerous mountain dairy huts which can be found at work in the summer in the Grappa area, situated amid pastures, little valleys and extraordinarily beautiful walking paths. The variety of herbs and flowers in the area bring out the flavour of Bastardo as the cheese ages.