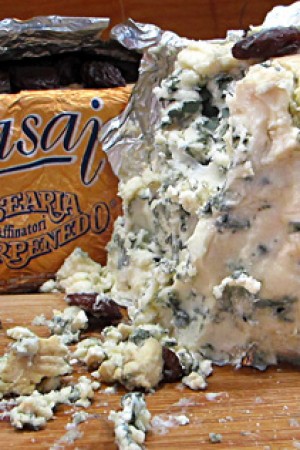 Basajo would be a compelling cheese even if it didn't have such an engaging history which only adds to the allure of this luscious wine-soaked blue. Basajo offers a seductive, velvety texture and mellow fruitiness, without the saltiness and peppery bite that turn many people away from blues.

Tasting Basajo you are carried away by a lovely pleasant feeling. It melts in the mouth and is featured by a sweet aftertaste given by Passito Wine.

Basajo in semi-circle form, is a creamy paste blue cheese made of sheep raw milk from Italy's Veneto region. Basajo (ba-SAH-yo) emerges from a long tradition of aging wheels in grape must.

At the end of World War I, when the battle was raging in the Veneto, locals faced dire food shortages. Not only did they struggle to feed themselves, but they were expected to provide for the soldiers, too. Some ingenious farmer in the province of Treviso, hoping to hide a few cheeses, thought to bury the wheels in barrels of fermenting grape must. The wheels not only escaped discovery; they got even better.

The Carpenedo family behind La Casearia has resurrected the technique with great commercial success. For Basajo, the 2-kilo (roughly 4 1/2-pound) wheels spend about three weeks bathing in Passito di Pantelleria, a sweet wine from Sicily, which infuses the interior with a honeyed aroma.

A few wine-plumped golden raisins cling to the outside of the wheel, which is cut in half for retail sale and foil wrapped.

Not uncommon with blue cheeses it may "weep," or release moisture, at room temperature. If that happens to your wedge, sponge it dry with a paper towel. The interior paste is moist and creamy, with big pockets of blue.