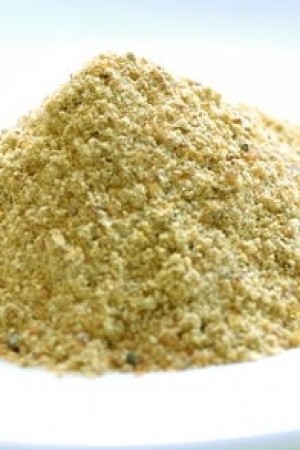 The most simultaneously misunderstood and sublime ingredient in Indian cuisine.

Known as "the food of the gods" Asafoetida (assa-foetida) is used as a flavor enhancer and, used along with turmeric, is a standard component of Indian cuisine, particularly in lentil curries, such as dal, as well as in numerous vegetable dishes.

It is especially widely used in South Indian cuisine, which is mainly vegetarian, and is often used to harmonize sweet, sour, salty and spicy components in food. It is used to hallmark the taste of Tamil Nadu sambar, a saucy dish made with cereals and lentils.

Asafetida is the ringer that makes so many Indian dishes exceptional. It’s a flavor that you can’t pinpoint in a dish or even fully explain but that lingers on your taste buds long after all the other spices. Once you start cooking with asafetida, every dish you eat without it will taste like it’s missing something. And you’ll know why.

Asafoetida is used mostly in Indian vegetarian meals, while the original raw flavor dissipates on cooking where it adds a garlic-like flavor with onion overtones.

Always use in small amounts and keep very well sealed to prevent contamination of the flavor to other ingredients in the pantry.  There is no added wheat, however may contain traces of gluten due to storage practices.

Asafoetida (assa-foetida) is the dried latex gum exuded from the living underground rhizome or tap root of several species of Ferula, which is a perennial herb. The species is native to the mountains of Afghanistan, and is mainly cultivated in nearby India. Asafoetida has a pungent, unpleasant smell when raw, but in cooked dishes, it delivers a smooth flavor, reminiscent of leeks.

Named after its aroma, Asafoetida is made from the white resinous sap, which turns dark brown on drying, of a variety of giant Fennel. It is a close relative to the now extinct 'laser root' that was mentioned in Roman cooking. Due to the difficulty in handling the resinous gum it is usually blended with some form of starch to make it manageable.

Some people use asafoetida for hysteria, insanity, convulsions, and as a nerve stimulant for ongoing mental and physical fatigue with depression (neurasthenia).

Women sometimes use asafoetida to restart their menstrual periods after menstruation has stopped for some reason.

Asafoetida is sometimes applied directly to the skin for corns and calluses.

There is some scientific evidence that the chemicals in asafoetida might help treat irritable bowel syndrome (IBS), and also might protect against high blood levels of certain fats including cholesterol and triglycerides. Chemicals called coumarins in asafoetida can thin the blood.

In manufacturing, asafoetida is used as a fragrance in cosmetics and as a flavoring ingredient in foods and beverages. Asafoetida is also used in products meant to repel dogs, cats, and wildlife.