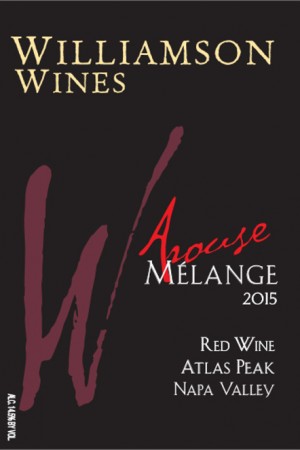 Arouse is a Mélange or blended wine made with full-bodied Malbec to push the flavors of Bordeaux and Mendoza to the limit with a distinctly Bill twist.

Malbec, a purple-black grape originally from France in areas such as Cahors and Bordeaux, has found fame in Argentina, flourishing particularly well in the foothills of the Andes in the region of Mendoza.

Now grown in the fertile Atlas Peak sub-appellation of California, the full glory of this rich and exuberant wine can be realized.

Robust and full-bodied, with lashings of smooth black fruit, notes of liquorice and spice flavors, a touch of chocolate and tantalizingly soft tannin producing a lingering finish.

Big, broad and beautiful this unique blend shows its Stagecoach Vineyard heritage. The perfect accompaniment for a steak or rich, tomato-smothered pasta dishes.

This wine is approximately 97% Stagecoach fruit with 3% of our double-gold medal rated Estate Merlot so its heritage is flawless.

The 2015 year delivered another stellar vintage. A mild winter caused early bud break, followed by protracted bloom and unseasonably cool weather in spring, resulting in smaller grape clusters and variable crop size. So although there isn’t a lot of it, the quality of the crop this year was exceptional, the fruit enormously flavorful so we decided to make something new, something to push the taste limits and arouse the senses.

Arouse is a Bordeaux blend but focused on Argentinian rather than French in structure. The dominate varietals in the blend are Malbec and Petit Verdot. Naturally there is some Cabernet Sauvignon, Merlot and Cabernet Franc but we wanted a decidedly Mendoza style wine and we got it!.

Matured in French Oak for 22 months, approximately 40% new, 40% one use and the balance neutral.