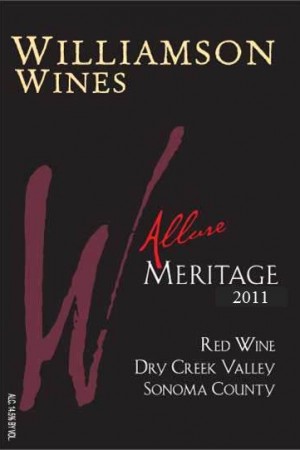 Bordeaux, yes all of it, both banks, all in one glass! An almost brooding dark garnet color comes to the nose in waves of blackberry and texture.

There is no doubt that this wine contains all of the “noble five” grapes of Bordeaux, but they have become so integrated that they are now the “Sixth Bordeaux!”

Allure is a Meritage, a seamless blend of the Nobel 5 Bordeaux varietals, Cabernet Sauvignon, Merlot, Malbec, Petit Verdot and Cabernet Franc but with not one varietal dominating.

The color is a deep, attractive ruby-red. The nose is bursting with red fruit aromas. The wine starts out quite rich on the palate, going on to show great balance, freshness, and minerality. The tannic texture is very fine and there is a beautiful long aftertaste.

The 2011 harvest was lighter and later than normal with flavors developing at lower sugar levels. A wet winter and spring delayed bloom and hindered fruit set, resulting in some shatter which caused us to selectively drop even more fruit and decreased the overall crop load. A generally cool summer prolonged the growing season and harvest started very late.