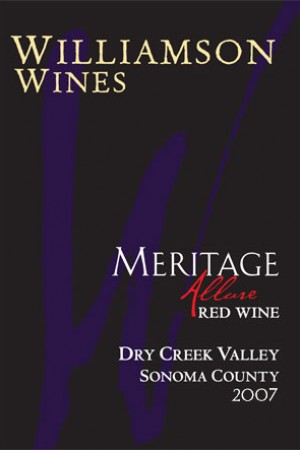 GOLD MEDAL WINNER at the 2011 SF Chronicle Wine Competition. Meritage Allure is a seamless blend of the Nobel 5 Bordeaux varietals, Cabernet Sauvignon, Merlot, Malbec, Petit Verdot and Cabernet Franc but with not one varietal dominating.

One can feel this wine unfolding, revealing layer upon layer of delicate flavor, then the surprise, taken into the mouth together with a complex, multi-flavored food like lasagna, the whole experience sings.

In the glass a lovely blackberry nose with alluring hints of plum and blackcurrant character. The palate offers a fresh although gently textured wine covering the ripe tannins that persist to the end very nicely with a depth, substance and richness.

In 2007 a mild winter with below normal rainfall, coupled with a dry spring, led to early bud break. The cool, moderate growing season heated up in the latter part of August, causing multiple varieties to ripen at that time. When the weather turned cool the second week in September, harvest went on hold. Around the first week in October, the jet stream dropped into Northern California, and we began experiencing periodic rain events every several days, as a result between the first of September and the first of October, the majority of our vineyards were harvested.