Aleppo Pepper is a highly desirable variety of chili, popular for its warm, fruity flavor and mild chili bite.

The Aleppo pepper has a moderate heat level of about 10,000 on the Scoville scale, with fruitiness and mild, cumin-like undertones.

Its flavor is similar to the Ancho chili, but smother in the mouth and slightly salty as salt is often used in the drying process.

It is fairly mild, with its heat building slowly with a fruity raisin-like flavor. It has also been described as having the flavor of "sweetness, roundness and perfume of the best kind of sun dried tomatoes with a nice chili follow through.

Unlike crushed red pepper, the flakes contain no inner flesh and seeds, contributing to the mildness. 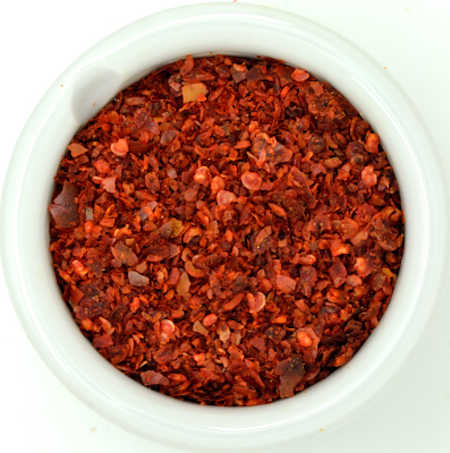