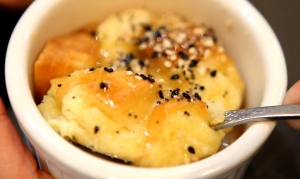 When the bread emerges it is covered with a delicious lavender glaze - Yum! Then you take a mouthful and wash it down with a slurp of Amourette Chardonnay - Wow!

Preheat your oven to 375 degrees

In a small pot heat the milk, heavy cream, sugar, salt and 1 teaspoon of vanilla extract over medium heat. Once it comes to a bowl take off of the heat immediately and let cool.

Add the cooled milk and cream mixture to a medium bowl and whisk in 2 tablespoons of the melted butter. Then Whisk in the eggs until all ingredients are well incorporated.

Use the last tablespoon of melted butter to grease a 13" X 9" baking dish. Add the cubed brioche to the baking dish, then pour over the creamy egg mixture. Do not fill the liquid higher than the bread. The liquid should cover the bread by 3/4. Bake uncovered in a 350 degree oven for about 20 minutes or until a custard has formed and there is a nice golden brown color on top.

While the bread pudding bakes, Heat the orange juice, orange zest, sugar, vanilla extract and Herbie's Lavender Flowers in a small pot until it comes to a boil. Remove from the heat and let cool until it thickens to a syrup like consistency.

Once the 20 minutes is up and your bread pudding has reached the desired texture of a firm custard, remove from the oven.

Serve immediately and pour the citrus lavender glaze on top of each piece. Enjoy with Williamson Wines Amourette Chardonnay!

Not a fan of bread pudding for dessert? No worries! This recipe is great as a breakfast dish too. Prepare the bread pudding the night before, store in the refrigerator over night. In the morning bake in the oven at 375 degrees for 20min. Serve immediately with the prepared citrus lavender glaze and crispy bacon!