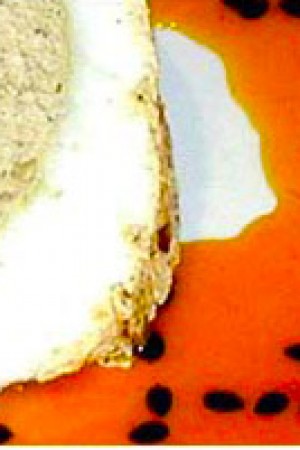 You may not have heard of this peculiar sounding ingredient, but it is starting to appear on both savory and sweet menus in the U.S. This Australian native spice adds a nutty, roasted taste to food. The first aroma is distinctly like fresh nutty coffee but then you can notice the more subtle chocolate and hazelnut notes.

The seeds are dried, roasted, and crushed to create extracts and grounds used in cooking and espresso. Wattleseed is roasted in a similar way to coffee but with a particular temperature profile, then specially ground to produce a highly versatile and nutritious flavor combination of coffee, chocolate and hazelnut.

Used in creamy foods like ice cream it will impart a more chocolate and hazelnut flavor, used in baking and liquids you will get a more coffee and hazelnut effect. Endlessly versatile, use in the same concentration as you would cinnamon, just a pinch for some mild flavor, more for a complete aromatic effect.

The Wattleseed of culinary use is always roasted and ground, a process that gives it an appetizing coffee-like aroma and taste. Wattleseed flavors ice-cream and desserts, and when used with other spices such as Coriander Seed, imparts a pleasant, barbecued taste to meats, especially full-flavored seafood such as Salmon and Tuna.

Health Benefits: Wattleseeds are a good source of energy, protein, fiber, and carbohydrates. They contain healthy fats for youthful, supple skin and minerals, such as potassium, calcium, iron and zinc, necessary for strong bones, and healthy cardiovascular function. Wattleseeds are naturally gluten-free. In Australia the seeds are commonly ground, and used as flour in recipes and cereals in Australia, where they are native. Due to their low glycemic index, there is speculation that they may make a suitable substitute for diabetics in the food industry. Wattleseeds are considered a good source of antioxidants, which promote youth and protection against free radicals, and environmental pollutants.