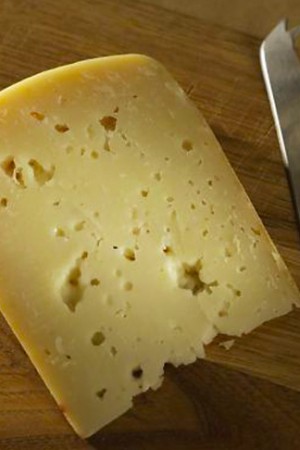 Don De Bernardi has become one of California's newest cheesemakers, producing an aged raw-milk goat cheese that is selling faster than he can make it.

Don's wife, Bonnie, bought a pair of female goats to amuse her grandsons. Eventually Bonnie bred the goats and began milking them. The herd grew, and the milk supply along with it.

Don and Bonnie went to Switzerland to visit cousins and spent some time in the high Alps watching the local people make goat cheese. That's when Don had the epiphany: Why aren't we doing this?

Two Rock Valley Goat Cheese is Don's attempt to re-create the aged goat tommes that are typical of his ancestral region. Bonnie looks after the goats - 35 milkers, with 21 more in the pipeline - and Don makes the cheese, sometimes with assistance from a grandson.

Each 9-pound wheel receives anywhere from two months to a year of aging at which time it develops a thin, hard rind with no mold in evidence; inside, the paste is firm and dry, although not granular, with a deep golden hue rarely seen in goat cheese. The aroma is nutty and meaty, with caramel notes and a suggestion of smoke, and the flavor is sweet and lingering.