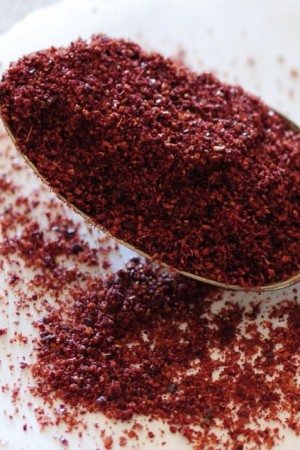 Sumac has a delicious, fruity, lemon-like tangyness,. It is a dark purple, Middle Eastern spice that compliments tomato & avocado.

Sprinkle over salads, particularly avocado and tomato, and use to season white meats during cooking.

Sumac forms a tasty crust when coated onto lamb joints before cooking.

Sumac of culinary use comes from a tree that grows in the Middle East. It is the outer flesh of the berry that is harvested when crimson.

Ground Sumac goes great sprinkled on seafood such as prawns, salmon, or halibut. Just use about 2 teaspoons of Crushed Sumac per serving of seafood to give your meal a bright lemony taste.

Sumac also goes great on roasted vegetables such as: Onions, squash, or potatoes. Pre-heat your oven to 425 degrees. Sprinkle your vegetables of choice liberally with ground Sumac and olive oil and roast for 30-45min. until tender.

Sumac is classified as an astringent spice. In Native American cultures, sumac was used to treat bladder infections, and for digestive issues as a remedy stomachaches, constipation, and water retention. It was also used for reproductive ailments, respiratory problems, infections, and wounds. Sumac berries are believed to have anti-bacterial and anti-fungal properties. They are commonly regarded for their ability to reduce some of the symptoms of fibromyalgia.

Do not attempt to identify and gather Sumac yourself, as there are many varieties of the Rhus family that are poisonous and can create severe allergic reactions in some individuals.