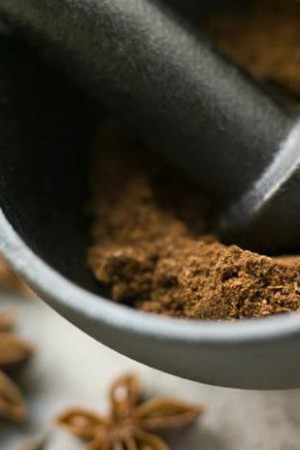 The dried, star-shaped fruit of this Oriental tree are called Star Anise because of their distinctive star shape.

Not to be confused with Anise Seed, Star Anise has a similar anise taste however it is quite pungent, clovey and licorice-like.

Star Anise is an essential component of Chinese Five Spice powder and is used in many Oriental recipes, especially those made with duck.

Star Anise also adds flavour to stewed compotes of fruit when placed in whole during cooking.

Health Benefits: Star Anise contains a plant-based compound that, in conjunction with antioxidants, is said to be a dynamic anti-viral combination. Extracts of star anise have been shown to exhibit strong antifungal properties, and is thought to be beneficial in eliminating toxic yeasts, such as Candida Albicans, which is linked to acne, migraines, low energy, and weight gain, to name but a few. Star Anise is an excellent source of antioxidants, which help to neutralize free radicals can cause premature aging and cell damage. Star Anise is also used for respiratory problems, and to ease digestive discomfort. It has been used to increase male and female libido.