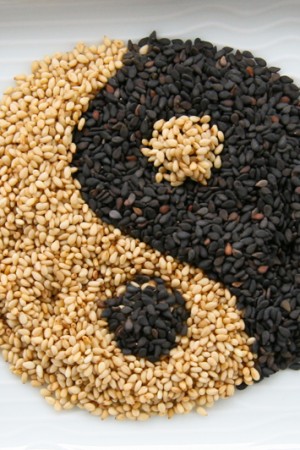 Sesame Seeds burst forth from the ripe seed-pods of the sesame plant with a shattering explosion, hence the term "open sesame"!

When baked or toasted, Sesame Seeds acquire a delicious nutty, crunchy taste, which makes them popular on biscuits and breads and even sprinkled over ice cream instead of chopped nuts. Black Sesame seeds are used in Japanese and Chinese recipes and Golden Sesame Seeds garnish and flavour the traditional Turkish bread called simit that is sold by street-side vendors.

Health Benefits: Sesame seeds are an excellent source of protein, and the mineral magnesium. Magnesium is necessary for bone health. Magnesium deficiency is common in individuals suffering from depression and anxiety. Sesame seeds are also high in zinc which helps produce collagen, and support a youthful and firm complexion. A handful of sesame seeds contains more calcium than a glass of milk.