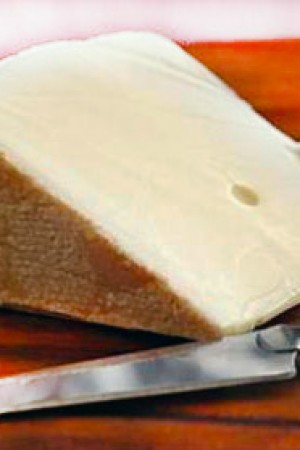 Loosely translated as “very sharp”, Scharfe Maxx is all about extremes: extreme funk, extreme flavor, and extreme creaminess. Fashioned from raw cow’s milk with a special surprise, to give Scharfe Maxx its extra lushness, the cheesemakers add cream to the milk. Rich and delectably buttery, perfect for a silky-yet-punchy fondue.

Crafted at Studer Dairy near the Swiss-German border from milk sourced from cows fed only fresh grass or natural hay and delivered same-day direct from the dairies to the cheese making facility.

A cheese that takes it so far to the flavor max that it necessitates not one but two Xs with a dense, smooth and firm texture, flavors are robust and meaty. The aroma is sweet barnyard air with the flavor of sautéed onions, beefy pungency, and a nutty bite.

On the edge of the Bodensee Lake in Canton Thurgau in northern Switzerland three master cheese makers at Käserei Studer are using thermalized milk to create this firm, powerful cheese. The cheese is washed in brine with herbs and aged for a minimum of six months to attain the tangy, meaty flavor. A little cream is added to the whole milk in the cheese making to retain its touch of creaminess.

The Studer family has been making cheese in the Swiss canton of Thurgau, near the German border, for three generations. The dairy initially produced Emmentaler, then transitioned to Appenzeller, both centuries-old Swiss cheeses with tightly controlled identities.

About a decade ago, the two Studer brothers who run the business now, along with a third partner, began expanding the creamery's line, creating a few proprietary cheeses such as Scharfe Maxx.

Released at about six months, Scharfe Maxx has a smooth, uniformly ivory paste with no eyes. The texture is semi-firm, dense and fudgy, the aromas profound but not aggressive with hints of mushroom, aged beef and peanut butter, and most prominently, the appetizing smell of fried onions.