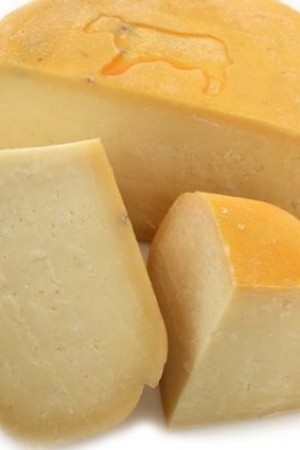 Crunchy protein crystals abound in this cheese. Mildly sweet and mellow when young, it develops a darker golden hue and nuttier flavor over time.

Its flesh is firm and granular with an aroma of toasted nuts and browned butter. It has pleasant acidity and salt balance with a deep lasting flavor and lovely sweetness.

Made from raw cow's mild with Vegetarian rennet, aged about 16 months.

The Fiscalini family dairy tradition dates back five generations to Switzerland. Mateo Fiscalini immigrated to the United States in the late 1800s, eventually settling in California. His son, John Baptiste Fiscalini, established Fiscalini Farms in 1914 and the dairy is now managed by his grandson.

Cheesemaking at Fiscalini is under the watchful eye of master cheesemaker, Mariano Gonzalez, who takes special pride in overseeing the aging of the cheese, a process that is critical to its development.

San Joaquin Gold, a firm cheddar-like cheese, is named after the valley of its creation. It was intended to be a Fontina but has developed into a unique cheese of its own. It has a firm and granular texture, a thin, natural rind and golden hue. An award winner at the World Cheese Awards and American Cheese Society, it has flavors of nuts and butter, and is wonderful for grating and melting.