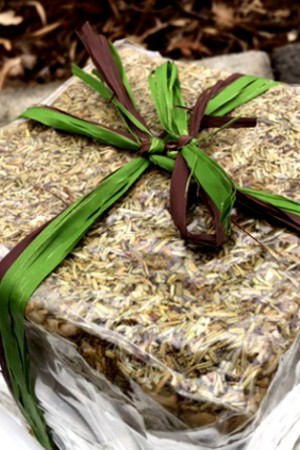 This cheese is produced in limited quantities and is not so easy to come by. In its early months, Salva is just turned over and brushed with water and salt and, when its rind starts to become moist, it is treated with oil, bay leaf, rosemary and other ingredients.

It is particularly hard to find fully ripe, when at its best. Very few operators handle Salva nowadays, since it needs to be ripened and cured with great care.

We have been lucky to find this particular Salva which is covered in an edible Rosemary crust which makes a delicious pairing with our Amour Merlot.

It is a welcome presence on the tables of Lombardy, and not only, with its aromatic taste and dry, crumbly consistency which makes it a perfect accompaniment for salads or vegetables and ideal as an ingredient in the preparation of a wide number of sweet or savory recipes.

Salva Cheese from Crema is a cow’s cheese, made of raw pastry, washed crust and mid-or long aging, traditionally consumed in the central plain of Lombardy and produced particularly in the area of Crema, Bergamo and Brescia.

A member of the same family as ‘Quartirolo’, this cheese is ripened for much longer periods. The name derives from the fact that it was once produced to ‘save’ (salvare) excess milk – in particular that already used for extracting the cream in order to make butter – from the animals feeding in the rich water meadows in southern Lombardy.

Salva Cremasco's taste is clean and milky with a touch of pungency from the washed-rind. To those who are afraid this means it's a "stinky cheese," we assure you that in this case the wash simply lends a subtle richness to the flavor. The texture is dense and crumbly from aging, which also gives it a distinct saltiness.

Most Italian cheeses are great for cooking, and Salva Cremasco is no exception. Sprinkle some on pasta or grilled bread, or crumble atop a plate of eggplant and tomato gratin. Its salty and versatile flavor matches well with a variety of dishes.

Great importance must be attributed to the production tradition of cheese-makers who, over the centuries and through the experience handed down from generation to generation, have developed and refined their cheese-making techniques. In their cheese-making activity, they have the know-how to best manage the delicate stages of production and they still use traditional materials which are stipulated to this day in the maturing stage. This makes it possible for the cheese to breath and release the excess whey, thereby allowing the cheese to mature normally and ripen slowly.

Moreover, the producers' experience and skill are essential for monitoring and assessing that maturing is proceeding correctly and to ensure that the characteristic rind forms. Indeed, during the maturing period producers have to sponge and brush the rind of each individual cheese. Brushing is particularly important and is carried out carefully using water and salt or food oil, marc and herbs. These abilities, which have been handed down from generation to generation, are reflected in the producers' manual skill which has developed in a manner reflecting the long-standing production tradition of the cheese. It is appropriate here to point out that some the cheeses were depicted in some 17th and 18th century frescoes.