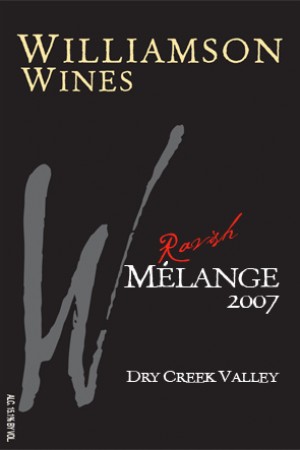 GOLD MEDAL WINNER at the 2011 SF Chronicle Wine Competition, Mélange is a French term for a mixture where the composition can easily be identified. A medium to dark purple color with some translucence. The nose shows a good but ghostly vapor that promises to follow you across the room.

Perfect paired with grilled meats and shellfish, such as charred prawns or scallops, especially if wrapped in a protein-rich food such as bacon or prosciutto. Try with semi-soft sheep's milk cheese preferably with a herb flavor and an additional servings of nuts or fruit.

This year of contrasts began dry with some very cold days and single-digit night temperatures and continued dry, with about 60% of normal precipitation. Temperatures were warmer than normal as winter continued into spring with resulting earlier budding, bloom and set in the vineyards. The summer growing season continued on the mild to cool side, with fewer days in the 90s, and harvest followed a traditional, even relaxed, pace. There was a brief period of heat that spiked around Labor Day, but the temperatures cooled after several days. This heat spike added the boost of sugar development we were looking for to complement the excellent acid structure developed in the white varieties. Clusters, as well as individual berries on the clusters, though set at a normal quantity, were notably smaller in all varieties due to the dry season. In September the region saw a couple of periods of brief precipitation. Nearly all white varieties were already picked and the thicker-skinned black varieties like Cabernet and Merlot were unaffected by the rain. The valley floor crop, including most of the black varieties, was almost fully harvested when unseasonably cool and wet weather arrived the second week in October. The higher elevation vineyards still had anywhere from 25-50% of their crop on the vine, but while the rain was just enough to penetrate several inches into the soil, not enough to get to the root zone of most vineyards. Indian Summer returned with warm, clear days and vineyard crews sprang into action to finish harvest for what appears to be a vintage of exceptional quality.