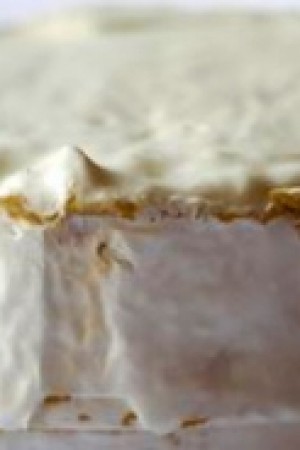 Produced in the Seine-et-Marne region of northern France, Pierre Robert is the creation of cheese maker Robert Rouzaire, who named it after himself and his friend Pierre.

The cheese was developed after aging their Brillat-Savarin cheese in caves and today production continues under the guidance of Robert Rouzaire's son.

"Pierre" also means "rock" in French. To distinguish the new cheese from other cheeses of similar appearance, Robert decided to put a small whimsical bump or "boulder" on the uppermost rind.

Made from pasteurized cow's milk, Pierre Robert is a decadent, triple-crème-style cheese that is extremely rich, buttery and yet mild in flavor with a straw color interior paste. With age, the rind can become quite thick and occasionally separate from the cheese underneath.

Pierre Robert is a triple cream cheese that’s similar to Brie. Buttery, smooth, and mild, this cheese can be eaten spread on bread or graham crackers and is delicious paired with honey and walnuts together with Williamson Heritage Shiraz.