Piacentinu Ennese is a unique sheep’s milk cheese from Sicily (Sicilia) which is infused with saffron, an ingredient rarely, if ever, found in cheese. Enna, the province from which the cheese originates, is also a producer of saffron.

This cheese’s other key ingredient is black peppercorns, although the flavor is not at all spicy. Mild and buttery, Piacentu Ennese boasts a delicate balance between sheep and saffron, with only a hint of pepper.

A rare cheese that is produced exclusively in Sicily, Piacentinu is most noted for its striking yellow color which results from the addition of saffron during the cheese-making process. The cheese has a soft rind, a fragrant, compact and yellow paste, and a delicate, savory flavor.

Still made by hand using ancient traditions, Piacentinu is crafted using antique tools and wooden vats. Aged for three months, it has a mellow yet distinct flavor and a dry texture.

Piacentinu is a cooked, semi-hard cheese. It is round in shape and available in various ages.

Traditionally, it is made in the province of Enna, Sicily, using whole sheep’s milk, pepper and saffron. Although the name of the cheese may lead you to believe that it is produced in the city of Piacenza, the word “piacentino” derives from piacintinu, which means enjoyable in Sicilian dialect, or possibly from piangentinu, or a cheese that cries, referring to the tears (lacrime) of fat that drip off the cheese when opened. Since 1100, piacentino has been known for its saffron color.

Ruggero the Norman (1095-1154), the king of Sicily, asked local cheese-makers to start producing this cheese because he believed that saffron caused an uplifting, anti-depressing, effect.. Saffron is still revered as an antidepressant and he intended to serve the cheese to his wife to cheer her up. Pepper, a wildly exotic, rare and precious spice, was also added to the cheese because it was popular ingredient in the Sicilian Court.

Still today, it is made using whole, raw milk from sheep that graze primarily on veccia, a leguminous weed found in and around Enna. The plant gives the cheese its incomparable flavor.

The milk, together with sheep or goat rennet, is heated to 140 degrees F and then whole black peppercorns and saffron are added. Once a mass has formed, the cheese is left to cool in its whey. The cheese is ready after a week. A wheel of piacentino is usually 14 to 16 inches in diameter and weighs between 13 to 26 lbs.

Sweet and perfumed with a dense paste, Piacentinu is the kind of cheese you can set out with a dish of green olives, cured meat, and roasted red peppers for a Technicolor cheese plate, or you can shave it over a deconstructed paella salad for a glimmer of sunshine. 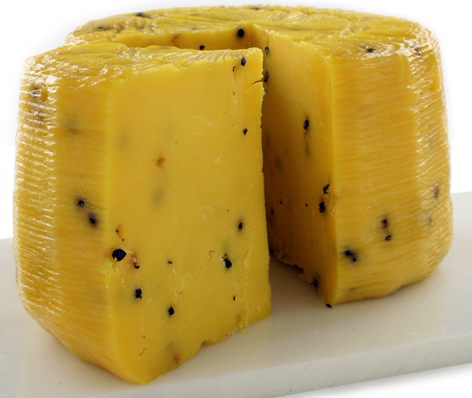