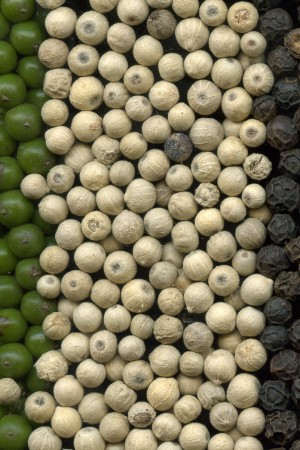 All true pepper whether black, white, green or pink comes from the berries of a tropical evergreen vine.

Black peppercorns are the green unripe peppercorns picked from the vine and dried in the sun.

The natural enzymes in the outer husk (pericarp) of the peppercorns turn the green berries black on drying, forming the volatile oil piperine which gives black pepper its characteristic flavour.

Black peppercorns come in many varieties with varying degrees of heat and flavor complexity. The largest black peppercorn is grown in Innisfail, Australia, considered to be the best because it's left on the vine longer for more developed flavor.

Green peppercorns are picked green and either put into brine or freeze-dried to prevent the enzyme reaction from turning the pericarp black.

White pepper is made by soaking the nearly ripe peppercorns in water, then rubbing them to remove the pericarp before drying them. White pepper is hotter than black, however it lacks the "oily" piperine taste found in black pepper.

Pink peppercorns are the fully ripe berries which are generally put into brine to prevent the enzyme reaction from turning them black. Pink peppercorns have a sweet, almost fruity note combined with an underlying heat.

Dried pink peppercorns are not from the pepper vine, but come from the "shinus" species of tree. These shinus peppercorns have a pine-like flavor which resembles Juniper and is different from true Pink Pepper.