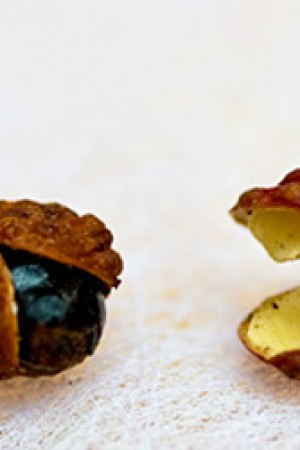 The peppercorn smell is wild and perfumed, and the taste is electric. Devotees swear it's both addictive and medicinal. It literally numbs the mouth, but also imparts a woodsy hint of pine and cedar, and an intoxicating touch of acid sweetness, like a lemon soda.

Many people are surprised to learn that Szechuan peppercorn is not a pepper at all - the distinctive reddish-brown berries hail from the prickly ash tree. Szechuan peppercorn has a fragrant aroma that has been likened to lavender. However, its main claim to fame is the powerful numbing sensation it causes around the mouth. When married with chili peppers (the other key ingredient in Szechuan cuisine), chefs believe this numbing effect reduces the chili pepper’s heat, leaving diners free to appreciate the capsicum’s intense, fruity flavor.

At Herbie's Spices we select the very highest quality that has been graded and cleaned.

Warning; some prickly ash thorns may remain after cleaning, so we suggest you look for thorns and remove them if you are using Szechuan Pepper in its whole form.

The husk or hull (pericarp) around the seeds may be used whole, especially in Szechuan cuisine, and the finely ground powder is one of the blended ingredients for the five-spice powder. It is also used in traditional Chinese medicine.

Health Benefits: Considered anti-inflammatory, may also aid in digestion and reduce flatulence associated with indigestion. May have anti-septic properties and is sometimes used to reduce toothache. A good source of vitamin A and minerals like copper, potassium, iron, manganese, phosphorous, selenium and zinc. Although they are not as hot as some chili peppers, they can irritate individuals suffering from stomach ulcers, colitis, and diverticulitis conditions.