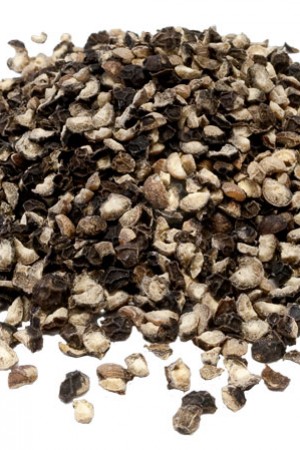 Black Pepper: The King of Spices

So perfectly does pepper typify the dried berries, bark, seeds and roots that we use to season our food that it was long ago dubbed the King of Spices.  For thousands of years, cooks around the globe have reached for the shriveled, sun-blacked pepper spice to bring food on the stove roaring to life. Pepper has the power to transform, to give our lives, “a savor more intense.”

The ancient Romans were crazy for pepper, paying such exorbitant prices that the historian Pliny complained that “100 million sestertii a year,” all Rome’s wealth, was flowing towards the East. When Alaric, King of the Visigoths, laid siege to Rome in 408 AD, he demanded a ransom of gold, silver and 3,000 pounds of peppercorns.

What all good cooks do know is that the aroma of black pepper whets the appetite.  As food writer Michele Anna Jordan observes, just the fragrance of fresh pepper can provoke a ravenous hunger.  In Salt and Pepper, she tells of touring a pepper warehouse in Sarawak.  Strolling through the aisles where peppercorns are being packed for shipping, she finds that “the aroma of black pepper eclipses everything until I am frantically, savagely hungry.  ‘Feed me now!’ I  think....”

Why do we use pepper?  In a word, for pleasure.  Unlike salt, pepper is not necessary for survival.  It keeps the psyche rather than the body alive.  We cook with it and grind it over our food for the way it heightens flavor.  In Elements of Taste, former Lespinasse chef Gray Kunz and food writer Peter Kaminsky explore this notion that “a dose of peppery heat pushes forward every iota of taste potential.”

The power of pepper lies in its ability to transform, to nudge flavor forward.  As Ian (Herbie) Hemphill points out, pepper can be used in concert with almost any other spice or herb.  In The Spice and Herb Bible, he lists 23 seasonings for which pepper has a “special affinity,” virtually the complete contents of any serious cook’s cupboard.

When do we use pepper? The authoritative Larousse Gastronomique states:   “Pepper is required in virtually all savory dishes, whether they are served hot or cold.”  Almost instinctively, we reach for the peppermill when cooking savory food, especially meats.  Steak au poivre, traditionally prepared with cracked black pepper, underscores the point.

Pepper adds sizzle to foods that are naturally fatty.  One thinks again of a thick, well-marbled steak encrusted with cracked Tellicherry peppercorns, but pepper also underscores the unctuousness of wild Alaskan king salmon, crispy-skinned roast chicken, and rich pork tenderloin grilled on an open fire.  It puts a pleasingly sharp edge on the smoothly rounded flavors of butter, cream and olive oil, making them even more voluptuous on the tongue.  A plate of pasta with olive oil and garlic comes alive with a twist of black pepper, as do all sorts of vinaigrettes.  Rich, smooth flavors, such as those in a buttery baked potato, become even richer and smoother when spiked with pepper.

In France and Italy peppercorns occasionally turn up in superb cheeses.  Hard, salty pecorino pepato, for instance, is embedded with whole black peppercorns that burst upon the palate like explosive little land mines. Grate it over a plate of pasta dressed with olive oil and garlic, perhaps with a few more lashings of coarsely ground pepper, for an irresistible supper dish.

Black pepper works wonders with flavors that are sweet.  It has a particularly exquisite effect upon very fresh shellfish, whether used simply to bring out the natural sweetness of briny shrimp or scallops, or to add a more robust heat to dishes like Singapore black pepper crab.

The Roman Apicius, whose recipes used pepper lavishly, recommended it in desserts.  Today, Italians grind pepper over ripe strawberries, then sprinkle a few drops of aged balsamic vinegar for a honeyed-tart note.

In India, mangos and watermelon are eaten with freshly ground black pepper to heighten their luscious flavor.  In Germany, old-fashioned pfeffernusse cookies (literally “pepper nuts”) are seasoned with pepper as well as other spices.  Upscale chocolatiers from Chicago to Paris are creating truffles and candy bars that play up dark chocolate’s affinity for black pepper.

Health Benefits: In Ayurvedic practices, pepper is added to tonics for colds and coughs and may also act as an expectorant providing relief from congestion. It is considered anti-bacterial and an excellent source of antioxidants. Pepper increases the hydrochloric acid secretion in the stomach and may improve sluggish digestion in some individuals. Piperine, one of the key chemical components of black pepper, has been shown to improve cognitive function, and slow memory loss.

A Note Of Caution: Pepper can be irritating for individuals that have inflammatory bowel disorders, or irritation of the digestive lining.