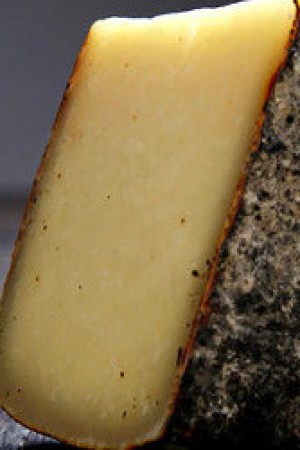 This is a cheese that appreciates some time to open up, especially if you've just taken it out of the fridge. At first crumbly, grainy, and mild, Pecorino Ginepro opens up to reveal some of the delicate fruit notes imparted by its bath in balsamic vinegar, and finally segues into a sweet-cream finish.

The black-brown rind tastes like a musty basement...but in a good way. It’s the kind of funky, unique flavor you only find in aged products like cured sausage, or a really old bottle of wine.

The unique maturation process gives the cheese a dark burgundy exterior, grainy texture that is a little chalky and white. The flavors of the balsamic vinegar and juniper seeps into the bone-white paste and give the salty cheese a sweet finish of juiciness.

Produced by Romaniae Terrae, Pecorino Ginepro is an Italian cheese made with highly selected sheep's milk pasteurized at optimum temperature. It is covered with juniper berries and Modena balsamic vinegar and then left to ripen in wooden crates till the cheese reaches a favorable maturing phase.

Pecorino is roughly translated as "livestock" and basically just means that the cheese is 100% raw sheep's milk. There are four different name-protected Pecorino cheeses being made in Italy right now (Including the ancient Pecorino Romano, a cheese so old it was mentioned by Pliny the Elder in the first century AD), and our guy is NOT one of them. He's a rebel and he doesn't need no stinking designation to be delicious.

The production starts off weirdly similar to a washed rind cheese: After being pressed and salted, the round is bathed in balsamic vinegar (a prized product of the local Emilia-Romagna region) as well as juniper berries (which is where the ginepro comes in) several times over the first month of the aging process.

This is where the comparison to more stinky washed rind cheeses breaks down, though, because after the first month the washings stop, and the cheese is left to age peacefully for another 4-5 months. What results is a cheese that is a non-standard take on a recipe that is centuries old.