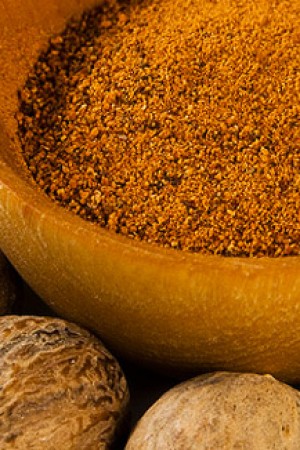 Nutmeg is considered important for culinary purposes because of its warm, savory flavor and sweet, cinnamon-like smell.

Herbie's Nutmeg is an ultra-premium grade, dark-brown, aromatic, high oil content, unadulterated nutmeg which will help lift a dish to another level.

Nutmeg is not one spice, but two. Mace is also derived from the nutmeg fruit. You've probably used nutmeg as a sweet spice, in sweet dishes, with fruit and in pastries and many dessert dishes, but it also works well in savory recipes.

Nutmeg compliments vegetables such as pumpkin, carrot and spinach while Mace is more pungent and tends to be used in savory dishes such as sauces for fish, in pickles and chutneys.

It is common to want to substitute nutmeg for mace, however this is not recommended as there is nothing like the real thing. Nutmeg is usually used in powdered form.

The first harvest of nutmeg trees takes place 7–9 years after planting, and the trees reach full production after 20 years.

This is the only tropical fruit that is the source of two different spices. Several other commercial products are also produced from the trees, including essential oils, extracted oleo resins and nutmeg butter.

The nutmeg tree is evergreen, with oblong egg-shaped leaves and small, bell-like light yellow flowers that give off a distinct aroma when in bloom. The fruit is light yellow with red and green markings, resembling an apricot or a large plum.

Nutmeg is the seed of the tree, roughly egg-shaped and about 1 inch long and ½ inch wide, and weighing 1/3 ounce dried, while mace is the dried "lacy" reddish covering (aril) of the seed.

As the fruit matures, the outer fleshy covering bursts to reveal the seed. The seed is covered with red membranes called an aril, the mace portion of the nutmeg. The nut is then dried for up to 2 months until the inner nut rattles inside the shell. It is then shelled to reveal the valuable egg-shaped nutmeat which is the edible nutmeg.

Second-rate nuts are pressed for the oil, which is used in perfumes and in the food industry.

Whole nutmegs should be sound and unbroken with little or no evidence of worm activity. Avoid low grade (broken, wormy and punky) nutmegs being generally last-season material which is low in oil content and when ground yields a light brown powder.

Nutmeg essential oil is sourced from the dried kernels of the Myristica fragrans tree, indigenous to the Spice Islands of Indonesia. The volatile oil in nutmeg and mace contains small amounts of myristicin and elemicin, which are narcotic and poisonous; therefore they should be used sparingly.  Eating four to eight teaspoons of ground nutmeg causes mild hallucinations, nausea and a severe hangover.

Nutmeg is thought to aid in sleep. It is a good source of minerals, including iron, potassium and calcium.

The essential oil of nutmeg may bring relief from muscular and joint pain, and has also proven beneficial in reducing oral pain. Reputed for its anti-inflammatory, antimicrobial, antioxidant and cleansing properties, Nutmeg essential oil exudes a warming, relaxing, spicy aroma that can energize the mind as well as deeply soothe the senses.

Nutmeg may contribute to increased blood circulation and aid the kidneys and liver in detoxification. It is thought to help boost the immune system.

In the first century A.D., Roman author Pliny speaks of a tree bearing nuts with two flavors. Emperor Henry VI had the streets of Rome fumigated with nutmegs before his coronation. In the the sixth century, nutmegs were brought by Arab merchants to Constantinople. In the fourteenth century, half a kilogram of nutmeg cost as much as three sheep or a cow.

The Dutch waged a bloody war on the island of Banda over control of nutmeg production in the East Indies. In 1760, the price of nutmeg in London was 85 to 90 shillings per pound, a price kept artificially high by the Dutch voluntarily burning full warehouses of nutmegs in Amsterdam. The Dutch held control of the Spice Islands until World War II.

Frenchman Pierre Poivre transported nutmeg seedlings to Mauritius where they flourished, ending the Dutch monopoly of the spice. The British East India Company brought the nutmeg tree to Penang, Singapore, India, Sri Lanka, the West Indies, and most notably Grenada, where it is the national symbol and proudly emblazoned on the country's red, yellow, and green flag.